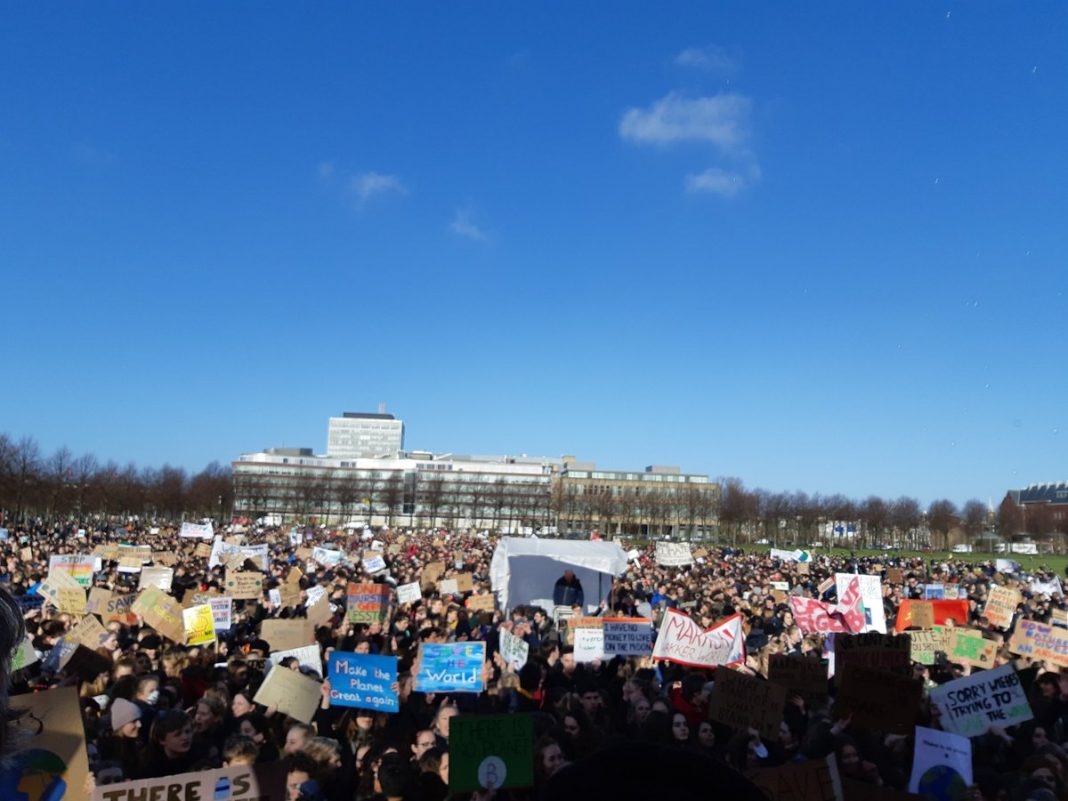 Ask a number of random students at the Malieveld why they didn’t go to school and you’ll keep getting the same answer; politicians pay too little attention to the climate, or rather, they don’t take the problem serious enough. And since students tend to be too young to vote, they have to find an alternative way of being heard. There’s a sense of genuine faith in the success of their strike. Politicians might be whining about the climate deal the coalition has reached, but it is our future and that of our planet they’re messing with.

That all seems to make perfect sense and it sounds fair enough. The people I talked to at the train station and in the train towards The Hague were all very positive about these young adults making their voices be heard. Even though every single one of them missed their trains because they were packed with protesters heading for the Malieveld. These students get a lot more going by coming during a weekday instead of during the weekend and in addition, this demonstration is good for their own personal development. However, not everyone supports the skipping school/going on strike. Our Minister of Education, Arie Slob, for example stated that although he has sympathy for the youth going on strike, he believes ‘Saturday is an excellent day’ to do so. On top of that, there are so-called climate sceptics that fear a generation only being taught one side of the climate change story. Some of them say that if students want to be meaningful to the future, they should pay attention in school and learn useful things there. So was it a good idea after all to go out there this Thursday?

In short: yes. I believe this has been an extremely important moment for how this country looks at environmental problems, and also at the youth. Even if it’s not an important moment yet, it will become one in the future. To illustrate what I mean, I need only give one example; one of the aforementioned climate sceptics revealed in the AD that “global warming could become a problem, but it isn’t one just yet” and that he therefore thinks the problem of climate change is being overestimated. He also suggests that young adults won’t be willing to make sacrifices to save the environment, further emphasising the problem in them skipping school. In other words, we shouldn’t prevent a terrible issue, we should wait to see if it happens. I won’t spend any more words on the absence of logic in this statement. By making their point, these students get people to think about the environment and hopefully will lead them to better communicate about it as well. From politics to the people, from science to politics and to the people, and from the people to politics. This strike suddenly got everyone talking about the environment again and people seem willing to listen to both sides of the story. Total strangers talk about it in the train. At the train station, on the street, at the university. It gives us the opportunity for better understanding of the situation and the options we have. This way we can prevent the problem from ever arising at all.

Was this Thursday the right day? Absolutely. The environment even supported the students; despite the not so unusual wind it was a clear day. In the weekend, much less people would have given any serious attention to the strike and that students skipped school assures them of most adult’s sympathy, according to the passers-by I’ve spoken to. Of course there are plenty that see skipping school as a bad thing, but in this particular case they are in general the ones that refuse to see we’re having environmental issues in the first place. By sacrificing something important, the protesters show how adults do the exact same thing: they are sacrificing the environment. They run away from their duty to fight unnatural climate change. And so students run away from their duty to go to school. They can’t hold adults accountable for their actions since they don’t yet have the right to vote, but it does happen the other way around now. ‘We’ve been reported as absent while we had permission to go!’ one girl complained to me in the train. Let’s hope that injustice opens people’s eyes and makes them think. Think about what they have to sacrifice for the environment and for the future, because it is really necessary.