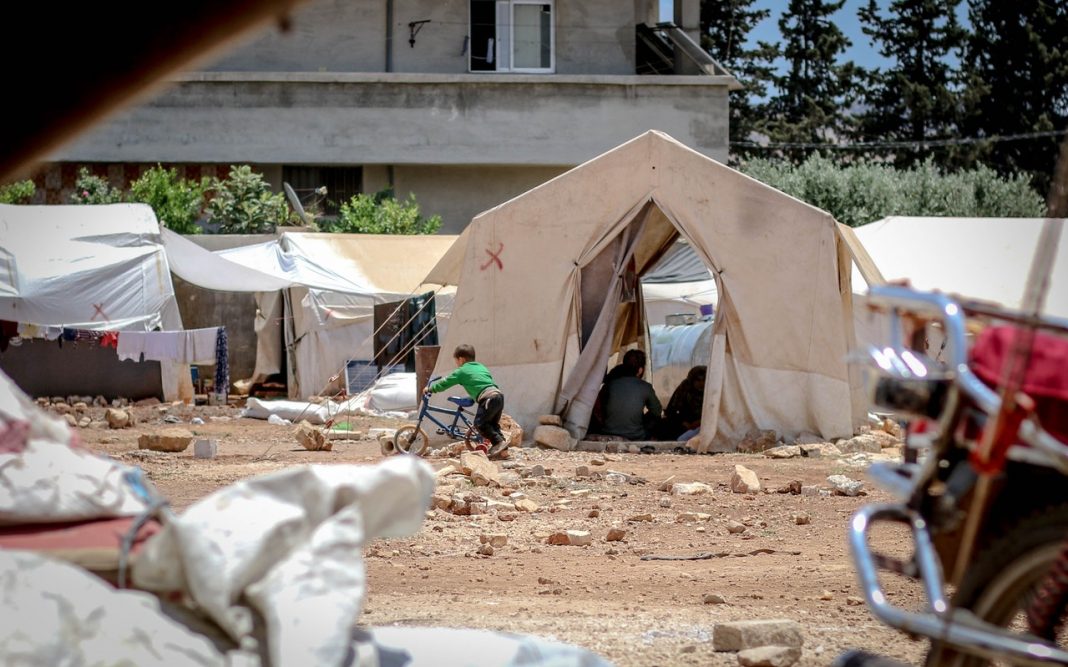 On the shores of Ceuta, Spain, a young man in a tank top and bright orange shorts lies face down clutching a palm-full of sand. It is difficult to make out his expression, but it seems as though he is crying. In another photo of the young man, there is no question about his expression as he cries while being comforted by a member of the Spanish Red Cross. Along with roughly 8,000 other migrants from Morocco and Sub-Saharan Africa, this man had swum from Morocco to Spain, risking his life in search of asylum. On arrival, many migrants were caught by the Spanish military, and an estimated 6,500 migrants have been sent back to Morocco.

Viewing Spain’s reaction from a humanitarian perspective, it is deplorable to send migrants back to the country they have fled when they have done so because they feel they are in such dire circumstances that they will endure a treacherous journey to flee. Representatives of human rights organizations, such as Judith Sunderland from Human Rights Watch, have condemned the speed at which migrants have been sent back, arguing that there is no way cases can be reviewed so quickly in a way that properly assesses each migrant’s circumstances and properly respects Spanish, European, and international human rights and refugee law.

Spain, however, has actively blamed Morocco as being the primary perpetrator of inhumane behaviour, arguing that Moroccan leaders deliberately triggered this migrant crisis and loosened border controls as part of a dispute between Spain and Morocco concerning the Western Sahara. Although influxes of refugees from Morocco to Spain are nothing new, this particular case of alleged deliberate creation of a migrant crisis by Morocco as part of a general political dispute is a case of what some have called weaponized migration in the context of a larger connectivity war. This article examines the concept of weaponized migration generally and other instances in which this has occurred before moving to examine the specific dynamics of weaponized migration in this most recent dispute between Spain and Morocco.

Let us begin with the basics: What is weaponized migration? Most prominently articulated by Kelly Greenhill of the Naval Postgraduate School in Monterey, California, weaponized migration is understood as a coercive tool in which population movements are deliberately created or manipulated to trigger political, military, and/or economic concessions from the target state. More broadly speaking, the concept of weaponized migration is part of a larger concept known as connectivity wars, in which the interconnections resulting from globalization in finance, trade, migration, and the like are used as a tool of coercion in international disputes. It has been posited that Western liberal democracies are particularly susceptible to coercion via weaponized migration due to their public commitments to the principles of liberal democracy and human rights. Specifically, this creates a situation where said states cannot turn away these migrants without being criticised for hypocrisy but also cannot continue to endure the political costs of taking in more migrants. Thus, liberal democracies may comply with the wishes of the sending state in order to ensure that they re-tighten their border controls to stop the influx of migrants to the target state.

While currently the most relevant case, the dispute between Spain and Morocco and the role of weaponized migration is only one among many examples. One of the earlier examples cited by Greenhill is that of Italy and Albania in the 1990s. In this case, the role of liberal democratic norms and the desire for international approval and to be viewed favorably in contrast to communist powers also played a role in Italy’s susceptibility to weaponized migration. Specifically, Italy’s initiation of the Operation Alba peacekeeping mission and provision of various forms of assistance at the end of Albania’s civil war was driven by Albanian President Sali Berisha’s claim that the influx of Albanian migrants to Italy would cease if Italy provided financial and other aid, but also because Italy sought to bolster its international image and reputation in European politics, particularly as Italy sought entry into the European Monetary Union. More recently, there have been accusations, primarily made by NATO and Western European officials, that Russia and Syria have weaponized migration, deliberately targeting civilians to pressure them to seek refuge in other countries, including those in Europe. Subsequently, the believed objective was to apply pressure on the receiving states due to the political and other strains resulting from the influx of migrants so as to force members of the European Union to cease supporting anti-Assad protestors and relax EU sanctions against Bashar al Assad’s regime. Relatedly, Turkey has also been accused of weaponizing Syrian refugees currently in Turkey to gain bargaining leverage against the European Union. In sum, particularly in the context of wars, Western states have propagated that migration is being used as a weapon and that civilians are deliberately being driven from their home states so that said states can attain desired concessions from the targets.

This raises the question: How do the dynamics of weaponized migration play out in the dispute between Spain and Morocco? This most recent instance of weaponized migration is allegedly motivated by actions taken by Spain in relation to Western Sahara, a former Spanish colony now claimed by both Morocco and the Polisario Front independence movement. More specifically, Spain recently made the decision to host the leader of the Polisario Front, Brahim Ghali, for medical treatment against Covid-19 without informing Moroccan officials. This is viewed as an affront to Morocco because the act discredits the legitimacy of Morocco’s claim to the territory, and indeed Spain, among other European states including Germany, have not formally recognized Western Sahara as part of Morocco.

It is believed that, in response to the accommodation of Ghali in Spain, the government of Morocco deliberately lessened the presence of military forces responsible for patrolling the border, particularly the part of the border from which migrants flee to Ceuta. Moroccan Foreign Minister Nasser Buorita has denied these claims, saying that the lesser presence of military forces was due to general fatigue among troops from continually maintaining strict border control and from the Eid al-Fitr holiday. Furthermore, Buorita claimed that the good weather made it easier for migrants to swim to Ceuta.

However, various officials from the European Union disagree with this interpretation of the events. Instead, they claim that Morocco deliberately loosened border controls so that those migrants who arrive in Ceuta could be used by the Moroccan government to pressure Spain, among other EU states, to return Ghali and recognize Western Sahara as rightfully part of Morocco. Indeed, Spanish Defence Minister Margarita Robles stated in an interview that Morocco was using these migrants as blackmail. It is believed that Morocco has taken these actions now because, following former American President Donald Trump’s statement that the United States would recognize Western Sahara as part of Morocco, Moroccan officials were hoping that European states would follow suit. However, Spain’s treatment of Ghali on humanitarian grounds poses a challenge to recognition, particularly because Spain has historical ties to the area and was responsible for guiding the decolonization process at various periods, making it essential for Spain to recognize Morocco’s claims. A further indication that the influx of migrants was deliberately intended by Morocco is that the flow of migrants was recently halted after Spain’s highest court issued summons for Ghali to appear before the court in relation to potential war crimes.

In sum, migrants may have been deliberately used by Morocco as a tool of coercion to pressure Spain, and other EU states, to either recognize Western Sahara as part of Morocco or to take action against Ghali. This would be an instance of weaponized migration because the objective of the relaxed restrictions was to create political pressure for Spain and other European states to take one of the aforementioned actions, rather than being the result of people fleeing for better lives.

Yet it is important to note that there are issues with the concept of weaponized migration. One of the primary issues comes from the framing of the concept, namely framing migrants as weapons rather than human beings, which can have political consequences for the way migrants are treated in the states in which they arrive. Furthermore, this also securitizes the concept of migration, and subsequently constrains the policy options available to deal with the influx of migrants; specifically, framing migration in the context of a weapon may make it so that the influx of migrants is handled as a state would address a security threat rather than a humanitarian crisis. Additionally, the concept emerged in the American military and has since featured as a prominent tool to justify various actions by the United States, NATO, and various EU states. This is potentially problematic because it may be that the notion of weaponized migration is not necessarily a tool employed by states on the targets, say Morocco on Spain, but rather a tool for states to justify deporting, detaining, or otherwise harming and depriving migrants of their basic rights for other political purposes in the process of securitization. That would mean Spain applied the accusations as a tool to justify the deportation of thousands of migrants rather than being deliberately triggered by Morocco.

As the world becomes increasingly interconnected and urbanized, the forms of political coercion are bound to continue evolving as they have throughout history. This likely means exploiting global interconnections for political, military, economic or other objectives in the form of connectivity wars. Weaponized migration is just another potential tool through which these forms of politics can occur, one that requires putting the lives of people in dire circumstances at risk. The case of Morocco and Spain serves as the most recent instance of weaponized migration, but it is far from the first and certainly far from the last. Yet as the forms of coercion advance and evolve, it will become increasingly important to consider the implication of these tools not only at the political level but also from the perspective of individuals being used as pons in the game of politics. For the man in the bright orange shorts lying face down on the shore of Ceuta, the thousands of migrants who arrived with him, and those who never made it to Spain, arriving at the border is not part of a grand political agenda but an immediate act of survival. In all of this, the rights and dignities owed to those who flee must not be lost in the sea of politics.

Photo by Ahmed akacha from Pexels