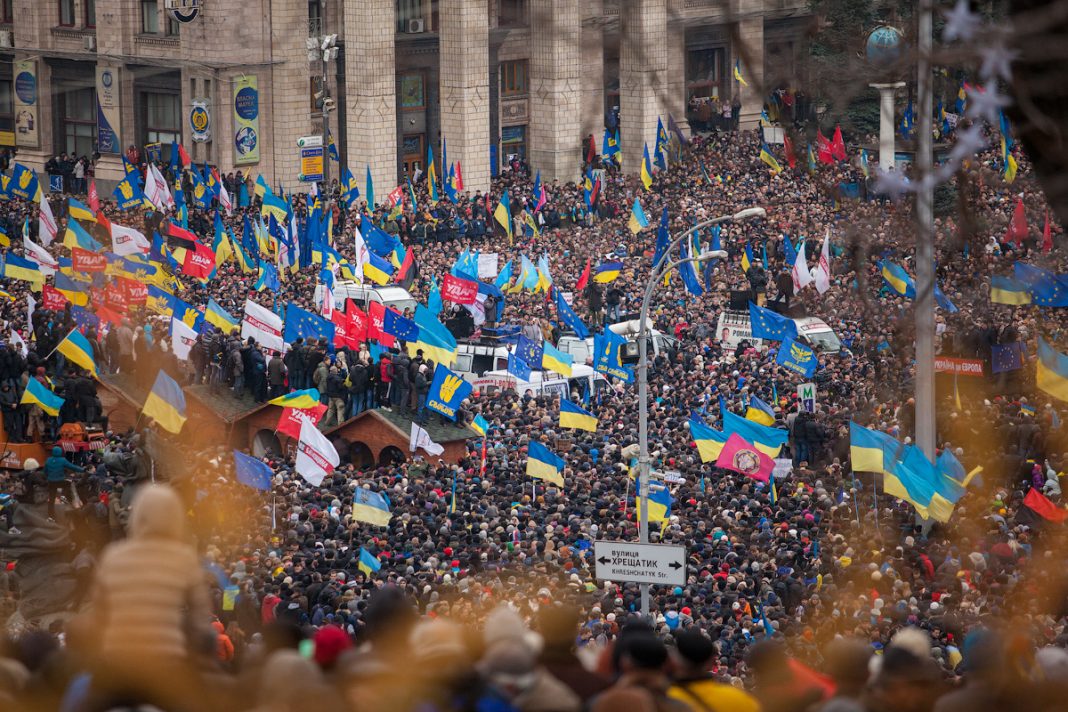 Coming Sunday Ukrainian citizens will take to the polls. These presidential elections have been intense, presidential candidates dragging each other through the mud, cyber-attacks by foreign actors, and quite some long-standing political notions have been disproven. The majority of Ukrainians no longer see the Russians as a fraternal people, and believe their country and Russia are in a state of war. For an outsider, it might seem these elections are of enormous importance, however it is expected these elections will have the lowest turnout in Ukrainian history.

The annexation of Crimea and the war in the Donbass region of eastern Ukraine still hold the largest country on the continent in its grip – making that about 12% of almost 35 million eligible voters will not be able to cast their vote, including Ukrainian citizens living in the Russian Federation. The Central Election Commission (CEC) cancelled polling stations in Ukrainian diplomatic missions in Moscow, Saint Petersburg, Rostov-on-Don, Yekaterinburg and Novosibirsk, moving these to the Ukrainian embassies in Georgia, Kazakhstan and Finland.

In 2010, former president Viktor Yanukovych – who was in 2014 ousted after the Maidan protests – built a national coalition of voters, primarily located in eastern and southern Ukraine. According to Paul D’Anieri, professor of public policy and political science at the University of California, and known for his expertise on Ukraine, has stated that it is impossible for any candidate to maintain a similar strategy. With Crimea and the Donetsk and Luhansk Oblasts voting overwhelmingly (more than 70% and not seldom more than 90%) for the Party of Regions being good for practically all of those not able to cast their vote, taking away a couple of million votes from pro-Russian parties.

In a field of in total 39 candidates, there are three serious contesters for the office of president of Ukraine – them being Ukrainian president Petro Poroshenko, actor Volodymyr Zelensky, and former prime minister Yulia Tymoshenko. All of them running on pro-European and pro-NATO platforms.

Although EMPR initially dismissed his potential candidacy, Volodymyr Zelensky is by now the clear front runner – consistently polling about ten percentage points higher than his rivals. Virtually assured of making it to the second round, the man playing of Ukraine in the television series Servant of the People, seems to be having an actual shot at becoming president. After he announced his candidacy on live television on New Year’s Eve, he has been running on a platform for change, eager to fight corruption and a plea for direct democracy, it became clear that wants to put NATO and EU-membership to the Ukrainian people in a referendum. As a native Russian speaker, comments about the use of the Ukrainian language have made him the of attention, he is perceived to be the most pro-Russian and is often as a populist. His candidacy has prompted some to worry about Ukraine’s place in world politics. Taras Kuzio – who in 2010 famously predicted the annexation of Crimea – has expressed his concerns saying that Ukraine’s problems with Russia lie in the fact that most Russians believe Ukraine is ‘an artificial and failed state and Ukrainians are a branch of the ‘‘Russian people.’’ Adding that ‘Russia does not respect Ukraine’s right to exist.’ Ukraine is seen as ‘fake news, a joke,’ according to Kuzio, electing a comedian would, for Moscow, only confirm that.

When Politico portrayed her as one of the faces to shape Europe in 2019, Yulia Tymoshenko had declared her candidacy for president for some time. As the candidate for the Fatherland party (Batkivshchyna) she has been depicted as a shapeshifter, unpredictable and inconsistent, both a far-right Ukrainian nationalist and a Kremlin puppet. While the braid she wore for years is internationally the most covered item, Tymoshenko – who spend two and a half years in prison for political reasons – can write history as the first female president, refiguring Ukraine’s destiny for decennia to come. She has a clear plan for Ukraine, a new constitution, better infrastructure, and meeting everyday Ukrainians’ basic needs. However, her big plans have not majestically propelled her to be the clear front runner. Ukraine’s former prime minister is running for the third time, but currently polling at around 18% of the vote and fighting sitting president Poroshenko for a place in the second round.

”Ukraine is seen as ‘fake news, a joke,’ electing a comedian would, for Moscow, only confirm that.”

And so, the incumbent has come a long way, a year ago he polled around 6-7%, but since Petro Poroshenko officially announced his bid for the presidency on January 29th this year, his poll number significantly increased to just under twenty – fighting Yulia Tymoshenko for a spot in the finale of the presidential race. She has repeatedly attacked him for not fulfilling the promises he made in the 2014 presidential election, which has been one of the most heard criticisms pointed at the present Ukrainian head of the state – who is the sole major contender whose website is available in Russian. Allegedly, Poroshenko has been silently endorsed by the United States, which would be no surprise as he would keep Ukraine on its track, it probable that he is Ukraine’s most steady and stable choice. The question is , do the Ukrainian people prefer stability and continuity, or hope and prosperity?

Not entirely unexpected, as Ukraine still is an Eastern European post-communist democracy, the run-up to the presidential election has not been without smears and allegations. Tymoshenko accused Poroshenko of funding an opposition member with the same initials and surname  to run, in order to spoil her vote. Poroshenko has however, denied any allegations of funding members of the opposition. Then there was the news that the CEC had changed the ordered number of ballots for the first round, reallocating almost 300,000 of them from the runoff to the first round. When the Commission could not easily explain, it raised questions and fears that the election were to be rigged in Poroshenko’s favour. That same Commission had in earlier months seen a considerable increase in hacking attempts and cyber-attacks, often targeting the CEC’s website, but also ministries and other government services. Amongst those ministries targeted, the Ministry of Internal Affairs which has opened probes into Poroshenko paying voters to cast their ballots with his name, simultaneously the Security Service of Ukraine (SBU) has been investigating Tymoshenko over similar campaign activities. Next to that, two news outlets, NewsOne and 112, have been accused of pushing Russian propaganda, making it seem as if Ukraine stands alone and needs Russia for its survival, setting the image of an impoverished nation, and downright calling Ukraine a fascist state.

It leaves not much to the imagination that these elections have been and will be going smoothly. No matter what choice Ukraine will be making this weekend, the Ukrainian people are tired. Tired of the conflict. Tired of false promises. Tired of corruption. Tired of politics.

The first round of the Ukrainian presidential election is set to take place March 31st, in case no candidate gets an outright majority – which is highly likely – the second round will take place on April 21st.