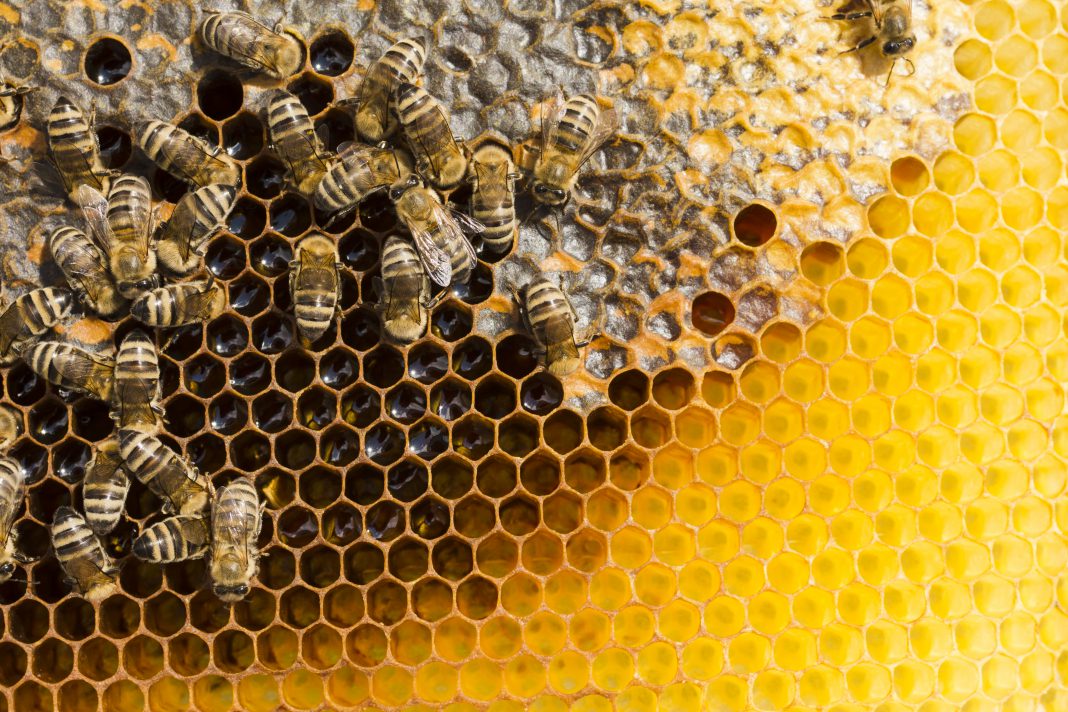 Imagine a beautiful summer’s day and you are walking through the countryside. The warm air is thick with the lingering sweet scent of wildflowers. You observe a swarm of bees buzzing nearby, and think to yourself how happy they must be, collecting pollen and nectar, taking them back to the hive. You look forward to the day the beekeeper will collect the honey they produce and that pure and delicious product will find a way to your table. Everything seems peaceful and in balance. What you don’t realize is situation is far from what you believe it is.

The number of honeybees is sharply declining, especially in Western Europe and the US. This could be devastating for humans as bees are essential for the pollination of a wide variety of crops and plants. FAO (Food and Agriculture Organization of the United Nation) reports that more than 75 percent of the world’s food crops rely on pollination at least to some extent, such as coffee, apples, potatoes, strawberries, tomatoes and cocoa, to name just a few. Loss and degradation of pollinators’ habitats, intensification of agriculture, loss of diversity of plants and flowers and the spread of diseases are all common denominators involved in the pollinators decrease all over the world. The shifting trends in the world’s honey market, due to the import of cheap honey from China into the EU, have made the situation even more serious.

The decline in number and diversity of honeybees is a very worrying development, especially because it’s accompanied by similar downward trends in other pollinators such as hoverflies, butterflies and bumblebees. The use of pesticides has only worsened the situation. Neonicotinoids – pesticides that affect bees’ sense for spatial orientation and destroy their nervous systems – have been linked to a phenomenon called ”Colony Collapse Disorder”, in which an entire colony of pollinators suddenly dies out. As a result, the US, EU and others are working towards banning it. There have been other factors that have contributed towards pollinators’ demise, such as the spread of pathogens and invasive competing species from Asia, such as Varroa mite (Varroa destructor) and the Asian hornet (Vespa velutina).

The welfare of the bees should be a priority on policy- making agendas, not just from an environmental perspective, but also economically. If bees were to become extinct, agriculture would face an enormous crisis as pollinating by hand is expensive and labour-intensive. Given the fact that the farmland devoted to producing crops dependent on bees has increased by 300% since the 1960s, it is not surprising that the economic value of bees’ pollination work has risen to an estimated 265 billion euros annually worldwide.

Sustainable agriculture practices, reducing the use of pesticides, diversifying crops species and fighting climate change can help increase the survival rate of bees. Recognizing bees’ integral role in the ecosystem and economy, many local and national governments have taken these steps towards helping the bees. For example, Spain suffered a drought in 2015 which forced entire colonies of bees to seek shelter in cities like Valencia. Soon it became unsustainable for the residents and the city devised an innovative solution where firefighters collected beehives and redistributed them to a new municipal colony, placing colony boxes across the city to keep the bees from public places. Taking a step further, the city plans to pass legislation allowing residents to keep colonies for personal consumption and spread the awareness about the issue to all residents.

Cheap Chinese honey threatens the agricultural sector in the United States and the European Union. Without American and European bees our food production will fall and that is an enourmous problem.

Another illustration of how a city can make a noticeable difference are the efforts being undertaken in Amsterdam. Aware of the devastating consequences that the decline in numbers of bees could have, the city heavily invested in a bee-focused sustainability fund. It also banned the use of chemical pesticides, created green areas filled with flowers, and built ”insect hotels” all over the city. Soon, the city observed a sharp increase in the number and diversity of wild bees and honeybees species.

Beekeeping projects and initiatives can be found in other cities as well, such as Paris, New York and Vienna. Additionally, there have been some beekeeping knowledge-sharing initiatives. Slovenia, where beekeeping is an important part of its economy and cultural heritage, now exports its centuries- long traditions in apiculture to the US. Last year it also pushed for making May 20th the UN’s recognized World Bee Day to raise awareness about the issue.

From attending protests in Bavaria to signing Greenpeace petitions, more and more people are taking action to save the bees. As a result, important first steps have been made by several EU countries, such as banning the most harmful pesticides to bees, but many are still lagging behind. Understanding that this problem needs a common solution, the EU has launched a MUST-B project to better understand the multiple stressors on honeybees and is restricting the use of neonicotinoids. The FAO also became involved by launching the International Code of Conduct on Pesticide Management with the goal of decreasing the use of pesticides harmful to pollinators.

But there is another aspect of the problem that is rarely addressed and widely unknown. The world honey market is flooded by cheap low-grade Chinese honey, and the consequences are grave. The demand for honey in Europe’s market far exceeds its production, and it turns to China for about half of its imported honey. The production of honey in China skyrocketed in the last 15 years, despite the fact that it is experiencing a decline in bee population. The answer to the obvious question about how this is possible is that it is mostly done through fraud.

China harvests unripe honey – when it still contains a large percentage of water and artificially dries it in enormous ”honey factories.” This decreases time and costs associated with production. In order to mask the honey’s country of origin, pollen is added or removed and sugar syrups are injected to increase its volume. The final product doesn’t meet the legal definition of honey by EU standardsby any stretch of imagination. But because ofthe demands of the market, the EU isn’t heavily incentivised to amend its directive on how honeyneeds to be labelled. It only requires honey’s origin to be vaguely declared as ”blend of EU honeys”, ”blend of non-EU honeys” or ”blend of EU and non-EU honeys”. The latter is the most common, leaving consumers wondering how much of the honey is actually from the EU. Combining this with the fact that there is no single way of testing how authentic the honey is due to the variety of ways you can alter it, you get a market overflowing with jars of a cheap product that is not really honey. Honest and well-intentioned local beekeepers can’t compete with this degrading commercial approach. Beekeepers, losing their colonies due to pesticides and other factors, don’t have the incentive to replace them as their honey wouldn’t be sold. Results of this practice are appalling, and just one example of an EU country affected by it is Spain where honey production fell by 50% in 2018 compared with 2017 and the decrease in its bee colonies almost matched those numbers.

The future of agriculture heavily depends on how we approach the problems our bees face. It is not enough to rely solely on governments to address this, everyone can help. They can start by lobbying their city councils to ban the use of pesticides in parks. They can plant diverse species of flowers in their gardens and not cut the wild grasses. Citizens can put pressure on the EU parliament to introduce labelling of honey where you’ll know exactly where the honey comes from. Relatedly, they should support local beekeepers by buying their honey. Finally, why not encourage those who can to become beekeepers? One day the future of our world and even the survival of the human race could depend on it.