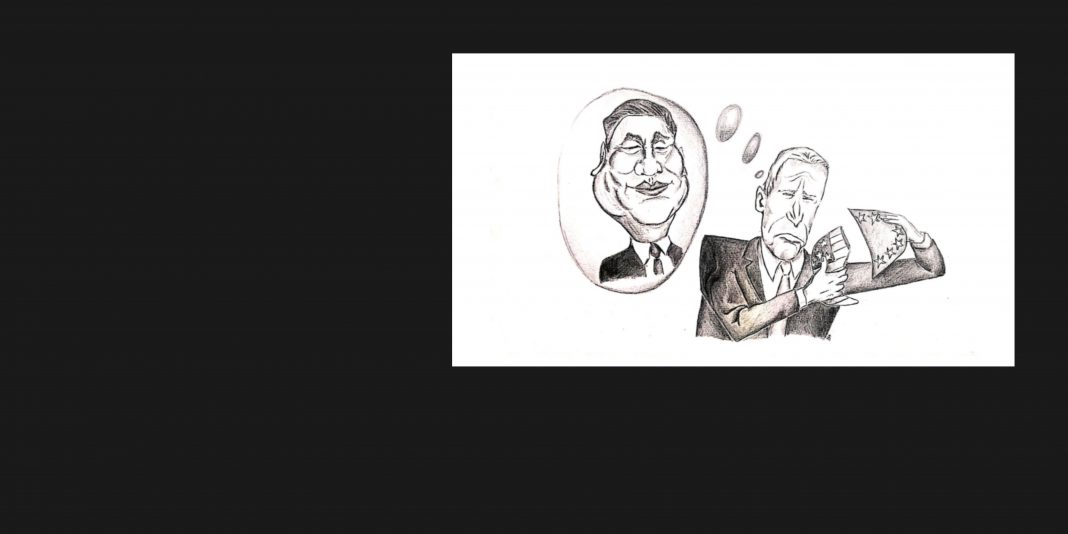 Rivalry of states regarding capabilities and intellectual values is not a new phenomenon. Having a fitting competitor enhances the progressive development of countries and creates new possibilities for learning. But how do the most powerful countries including members of the European Union react to their rivals in the current interconnected world? This article will examine the relationship between the US, China, and the EU and their recent interactions.

Based on the European public opinion on China during the Covid crisis, most of the European countries share negative views of China, especially Sweden, France, Germany, the United Kingdom, Spain, and Czech Republic. A neutral stance is shared among the Visegrád Group (Slovakia, Czech Republic, Hungary, and Poland). The exceptions are Russia, Serbia, and Latvia whose opinion towards China improved in recent years. Unsurprisingly, however, support of European trade and investments concerning China is generally viewed positively in most of the European countries. Nevertheless, the EU has found a particular issue that makes China one of their most important partners – the fight against climate change. Contrary to the more-or-less stagnant relationship of the EU with China, the US and EU are much closer. Recently, renewals of partnerships and setting agendas such as “Towards a renewed Transatlantic partnership,” EU-US Trade and Technology Council, and Build Back Better World initiative of the G7 together with the US to support the infrastructure of low and middle income countries only highlight their transatlantic collaboration.

Battle of sanctions and its aftermath

In March this year, the EU, the US, the UK, and Canada imposed sanctions on Chinese officials as a response to Chinese human right abuses in re-education camps of Uyghurs in Xinjiang. That was how the recent battle of sanctions was rekindled. It did not take long until China imposed sanctions on ten EU citizens who were believed to harm China’s reputation and other four entities as a response. This put in doubt the Comprehensive Agreement on Investment (CAI) that was finally negotiated after seven years. The CAI remains as one of the most ambitious agreements that includes milestones and principles such as sustainable development, fair treatment of EU companies from the Chinese side, investment liberalization, and even a dispute settlement mechanism. It presented a bright future for EU investors to gain access to the China market. In the end, it was halted by the sanctions that froze its ratification. Moreover, to counter the US and EU sanctions, China adopted the Anti-Foreign Sanctions Law whose targets are states, entities, and individuals against whom it takes countermeasures if they restrict or discriminate against Chinese citizens and organizations. Some can see these actions as too harsh but others claim that “China wants respect not confrontation”.

China was not the only country that used heavy sanctions. In late October, the US and Brussels finally came to the steel truce after long years of steel tariffs imposed by Trump with the aim of supposedly securing national security in 2018. In the end, steel tariffs were a mistake that increased production cost and prices while decreasing imports for the US. Consequently, the EU responded with retaliation tariffs on imports of motorcycles, bourbon and other products. As could be expected, the agreement of no more tariffs from the American side included a condition: steel quotas. Despite the condition, the EU happily accepted it since they have finally achieved the pre-Trump era of no tariffs again which was welcomed by the European Steel Association (Eurofer). President Biden also excluded Beijing from the discussion by appealing to the democratic values and friendship ties with the EU as well as the American and European environmentally friendly production process of steel. Furthermore, in the hopes of strategic competition, Biden appealed to the abidance of international law and pushed forward even more the idea of close partnership with the EU and also Asia against China and Russia. Therefore, the stance of the US regarding its relations to other countries is very clear. Ironically, the recent AUKUS alliance could be hindering this concept since it excludes the EU.

Even though there is American pressure on Europe to side with them against China, there is no real reason for Europe to do so. It is very unlikely for China to pose a threat for territorial integrity to any of the European states. Moreover, it is understandable that European countries are avoiding to alienate China and jeopardize their economic ties with Chinese investors. At the same time, desire to be independent from the US and issues inside their own region concerning Poland, Hungary, and Belarus are more pressing than any matters regarding China at the moment. On the other hand, Biden’s call on Asian countries makes sense since they are threatened by increasing regional hegemony of China and therefore have incentives to listen to the US.

After one hundred years of continuation of the Chinese Communist Party, President Xi Jinping’s prideful celebration of Chinese accomplishments did not please America. However, American behaviour is quite hypocritical. Despite having a Republican party that publicly undermines international cooperation regarding climate change and COVID-19 vaccination, and openly undermines the existing democratic order, it still ought to call on the cooperation principles and democratic values. The same author advises that the US should first of all focus on its own internal cohesion and external partnerships rather than confronting China.

To sum up, there is no clear answer that could predict how the situation will resolve itself in the future. The bickering of the aforementioned counties is summed up pretty nicely by the French Finance Minister Bruno Le Maire who describes the current situation with words: “[t]he United States wants to confront China [while the] European Union wants to engage China.” Not surprisingly, countries act based on their own interests which are often conflicting. It is likely that the nature of the US also fuels its decisions to be the director leading countries towards democratic principles. However, if these actions are not just a disguise for following its own political interests and securing its leading position in the international arena, it remains a question for everybody to decide for themselves.