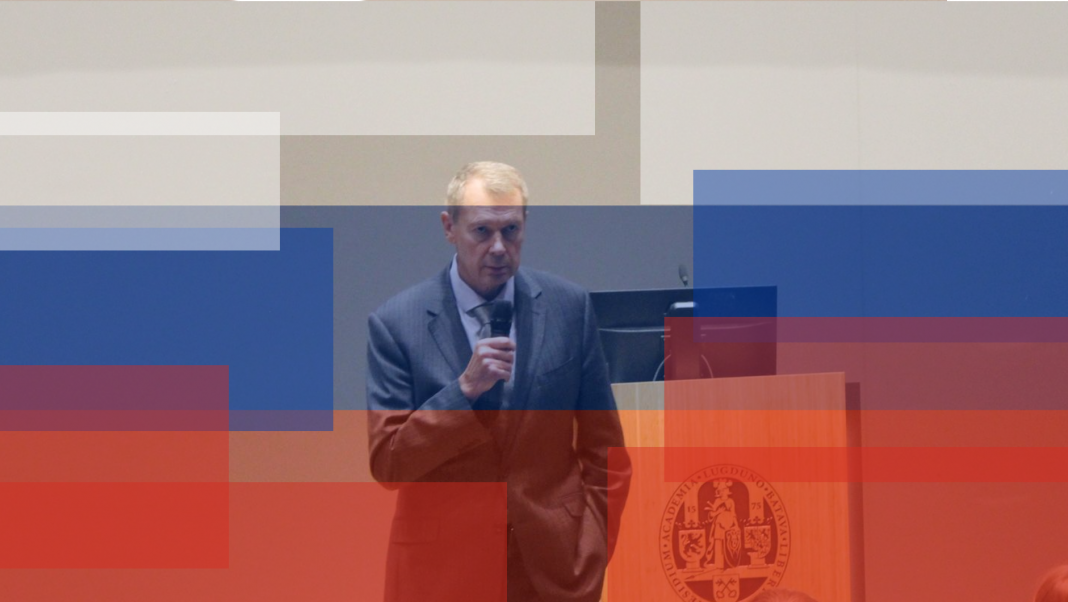 On November 7th, SPIL invited the Russian ambassador to the Netherlands Alexander Shulgin to speak on the occasion of the 38th anniversary of the Study Association for Political Scientists in Leiden. In just over an hour he made some extremely questionable statements and blamed much of Russia’s ‘‘distorted’’ image on biased western media and educational systems. So with a Russian camera pointed at me and my fellow students I asked him one very simple, straightforward question: ‘‘Do you think you are telling the truth?’’

To cut right to the chase, he was not. We could, for example, ignore Ambassador Shulgin’s comments about the Dutch being completely oblivious regarding the Russian’s share in fighting Nazi-Germany during the Second World War and the post-MH17 Russo-Dutch relations. He criticised the remembrance ceremony in Normandy because it lacked a mentioning of Russia and said Dutch media and education try to tone down the Soviet Union’s part of the fight against Hitler. The fact the Russians did their part is well known, without the USSR, Europe would not have been liberated from the brown spectre that is fascism. Be that as it may, the ceremony in Normandy centred around the 75th anniversary of D-Day – and if I learnt correctly there were no Soviet troops involved. Was it childish to not invite Putin? Maybe it was, but the values Western allies hold dear, especially in the context of the Second World War, such as democracy, individual freedom, and human rights, have no place in Putin’s Russia.

Shulgin seemed eager to portray Russia as a force to be reckoned with, but at the same time very much played with the idea that Russia is treated unfairly and how it nevertheless fought its way back from tough times. When asked to talk about the country’s transition from communism, he told those present that the 90s were especially turbulent years – as they were. Russia suffered from international terrorism, the wars in Chechnya and a terrible economic situation. When in 1990 images of Russians in dire need of medicine and food entered our living rooms, the Dutch raised 25 million guilders (equal to 20 million 2019 euros) via the public broadcaster’s fundraiser Help the Russians Get Through the Winter. How very different relations between the countries are as of today.

When asked to elaborate on the situation of LGBT Russians the ambassador told us Russia was, in fact, a very tolerant country. Saying there were ‘‘people who don’t even hide it’’ and that the entire matter all came down to ‘‘personal choice.’’ Questionable statements, being gay or transgender simply is not a choice and as of 2018 63 per cent of Russians believe that LGBT Russians are part of an organisation trying to overthrow traditional Russian values. Him giving examples of a few people who actually do not hide it and are open about it are great, but insignificant arguments, one swallow does not make a summer.

One of the subverted truths I put to him was if Russia was so eager fighting for freedom, why did 1.5 million Jews leave the USSR and its successor? They apparently felt the need to seek genuine liberty after having been abused for so many years. Shulgin started incoherently rambling about how the holocaust was not just about the concentration camps and was quick to remind me that Russia had in June inaugurated a memorial hailing the Jews as ‘‘national heroes’’ and that nowadays antisemitism is way worse in France than it is in Russia. In 2016, when Putin met with leaders of the European Jewish Congress, he welcomed Jews to come to Russia. And yes, when it comes to antisemitism, the current standing might be better in Russia than it is in France or the UK, but there is still anti-Jewish hatred. Emigrating Jews are most likely to opt for freedom and a lack of antisemitism, so they go to Israel, or maybe the US as Russian Jews themselves do, but Russia certainly does not make the list.

In the end, the Russian envoy did not really answer any of the questions posed by any of the students. When asked about Russia’s annexation of Crimea, he appealed to Paragraph 2 of UN Resolution 1514 which states that ‘‘all peoples have the right to self-determination,’’ and to be completely fair, that is how most Western nations justified the Kosovar declaration of independence. However, if the Russian Federation for 6 years took the position that the West was hypocritical, to allow the same thing to happen to another territory and then annex it, is hypocrisy at its worst. The violations by the Russian Federation of the Budapest Protocol and the Friendship Treaty only confirm Russia’s image as a nation not willing to abide by international law. I just ask myself why they try to convince westerners that they do hold them high, trying to pose as the keepers of those very things, while you act as if they are illegitimate.

In October of 2018, four Russians were expelled from the Netherlands because of an alleged attack on the Organisation for the Prohibition of Chemical Weapons (OPCW). Shulgin, who is also Russia’s permanent representative to the OPCW denied the attack altogether, saying it did not happen at all. The facts are however that the four deported, travelled on Russian diplomatic passports, that they met with officials from the Russian embassy at the airport, and that they were caught red-handed in a car next to the OPCW headquarters with all sorts of professional hacking equipment. They left a trail of evidence, leading back to the GRU (Russia’s foreign military intelligence agency) in Moscow, with a receipt showing when they took a taxi to Moscow Sheremetyevo Airport. Their laptops showed having their eyes on the next target, the Spiez Laboratory in Switzerland, which only days later verified the use of novichok in the Salisbury attack earlier that year. Although the Russians formally denied any involvement, the recklessness shows that Russia does not even care about being caught anymore – as overwhelming evidence clearly shows no one but the Russian Federation was behind the attack.

For many Dutch nationals, the shoot-down of Malaysia Airlines Flight 17 (MH17) remains a sensitive subject, when asked about the crash Ambassador Shulgin let out a deep sigh of compassion. He expressed his sympathetic pity and told the members of SPIL an eyebrow-raising story. After he, predictably, stated that the Russian Federation is innocent, he started a story about the shooting down of a Russian passenger flight in 2001. Shulgin vaguely described how Ukraine had shot down Siberia Airlines Flight 1812 but had gotten away with it, without admitting it was responsible and how that was more or less comparable to MH17, implying that Ukraine had gotten away with it once more. The real story, however, is that during a joint Russo-Ukrainian military exercise, missiles were accidentally launched, after which the Tupolev crashed into the Black Sea. After both the Russians and Ukrainians initially dismissed American intelligence that it was, in fact, an errant missile, Ukraine later admitted it was highly likely to have been theirs. The Ukrainians then paid over 14 million euros in damages to the relatives of the 78 victims.

Our university’s motto is Libertatis Praesidium, Latin for ‘Bastion of Freedom’ and every day, we as students of our university have the opportunity and obligation to live up to those very words. As a student of political science and international relations, I place incredible value in the freedom of expression. The liberty to speak our minds should never be in question, as it is the single most essential part of our academic education. Quintessential to that part of our education is having conversations with those with whom we resolutely disagree, as long as it is fact-based. However, having said that, as we talked about MH17, Crimea, cyberwarfare, LGBT issues and Russia’s transition from communism, some of the things Ambassador Shulgin said were definitely ‘‘alternative facts’’. He did not quite say it himself, but after what the audience heard; frankly, he either does believe he is telling the truth or knows he is not.

Opinions and views publicised in DEBAT do not represent the opinions and views of the association as a whole. Articles in which points of view are taken are solely ascribable to the concerned author.