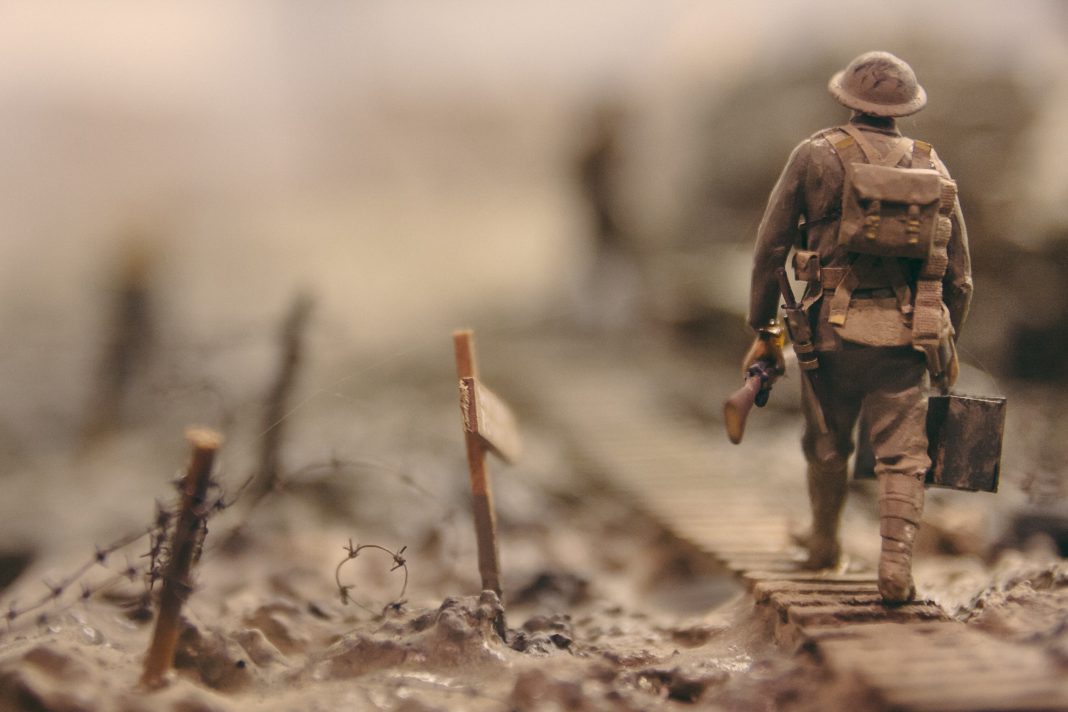 1917 is a film set in the eponymous year. Judging the title alone may lead you to think the story surrounds the Bolshevik revolution in Russia, but it is actually set in the trenches of the Western front. It follows two soldiers, lance corporals – Blake and Schofield – who are tasked with delivering an urgent message across no man’s land to prevent the annihilation of a division in which Blake’s brother is enlisted. This urgency injects the first shot of adrenaline into an experience which does not let up until its conclusion.

The film aims to depict a depressingly realistic view of the war in the West. The first scenes in the trenches give way to a crater-filled battlefield where the remains of barbed wire, animals and people dot the landscape. We are then taken to the underground trenches for which the German army were famous and are treated to a labyrinthine, claustrophobic section. Afterwards we see the abandoned farmlands untouched by shellfire with buildings where anyone could be hiding. Later on, the story takes us to a ruined French city and to a frontline where a push is about to occur. Finally, we see a field hospital into which hundreds are carried and where triage is a common practice. The film expertly wades through all the sorts of vistas present in the Western front. The thread holding them together – the utter emptiness of devastation left in the war’s wake.

With regards to cinematography, the film has attracted attention because of its ambitious ‘one-shot’ style. The term means that the entire film is shot so as to give the illusion of being done in a single take, with no cuts with a camera that is constantly moving around and following the characters. Transitions between scenes are done through the use of CGI and clever cuts to black as characters cross a shadowy threshold and during other situations. In an interview with Vox.com, director Sam Mendes states that he “wanted to tell this story in two hours of ‘real time.’ So I felt like it was a natural thing…That [cinematic] language was something that [cinematographer] Roger Deakins and I really worked hard to kind of develop.”

Indeed, the feeling of real time contributes to an incomparable feeling of closeness to the characters’ encounters. The viewer is able to feel the fear that the soldiers experience as they risk mortal danger. In the same way that Saving Private Ryan set a new standard for war films in its gruesome depiction of the physical horrors of war, 1917 accomplishes an illustration of the psychological toll that the constant fear of death takes upon combatants. The short interactions with characters played by well-known actors play on the feeling that one gets when recognising a famous person, like the characters do when meeting a commander of renown. Additionally, the film plays on the alienation of a world divided by nationalism when we meet characters of German and French nationalities, like seeing humans from a completely different world.

To summarise, 1917 is a unique take on the war movie genre and depicts a major conflict that nonetheless is rarely portrayed in film. The unique cinematography lends itself particularly well to the genre and adds to its realism. For fans of period dramas and war films, this is one work that they would do well not to miss. 5/5 stars.