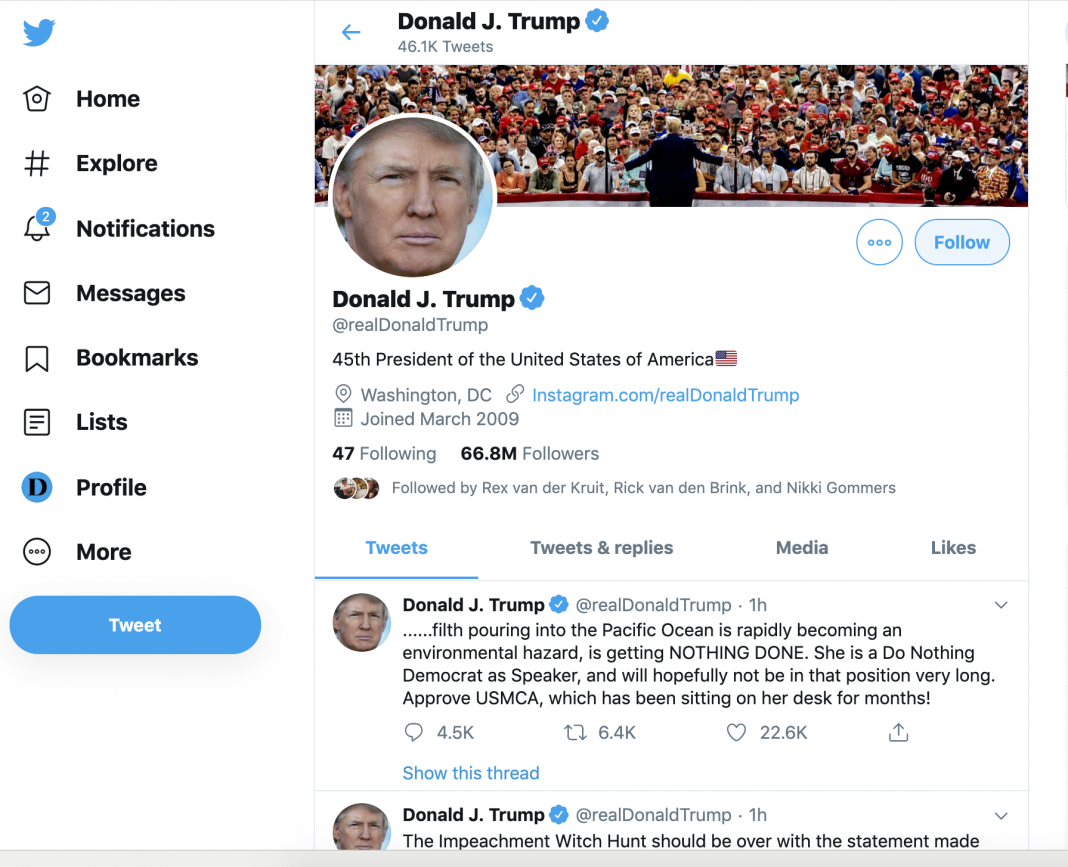 At the beginning of November, Jack Dorsey, the CEO of Twitter, told us that there will be a ban on political ads now that the presidential elections are coming closer. Around the same time, Mark Zuckerberg told us that Facebook will go on with political ads. During a congressional hearing, Zuckerberg let his standpoint slip about lies of politicians. Facebook will allow politicians to lie.

Is a ban desirable for the upcoming 2020 elections? Or is Facebook’s point of view better?

If we look at the desirability, one thing catches the eye: micro-targeting. Micro-targeting contains the following:

“Citizens are provided with targeted and colored information, with the goal to influence their choice for a certain opinion or political party. Often the voter is not aware of the origin of the information. What campaign message is distributed is partly unknown to the public.” Source: Kassa, wat is micro-targeting.

Micro-targeting is undesirable, because an unknowing voter is influenced in a cunning way, without this whole process being public. The ban on political ads, therefore, mostly prevents this phenomenon, considering the fact that a normal social media post will be received the same by everyone. Furthermore, normally someone will only see a post, if they choose so. The ban on political ads is therefore mostly a useful tool to prevent unwanted campaign techniques.

However, there are things that question the desirability and effectiveness of a ban. The question on desirability plays mostly on the value of the current political reality. The reality of political communication and campaigning is illustrated by Donald Trump and Alexandria Ocasia-Cortez, for example. Both are very active on Twitter and are constantly followed by other media. If the necessity of internet use for campaigns and communication is seen as desirable, campaigning through ads is also not necessarily undesirable.

The effectiveness of a ban is also not certain. Trump’s posts are not only seen by his followers. His tweets are shared en masse on other new media, and when it is about a threat to North-Korea, for example, also by traditional media. Micro-targeting is hard without payment, but reaching a big public is easy through social media. A broad form of campaigning is of course more public and conscious, but ‘advertising’ through social media is still possible with a ban on payed advertisement.

Moreover, the spreading of lies is not prevented by a ban on political ads. Every politician can still spread nonsense on the world wide web, and Twitter does not have to do anything about is with their new ban. It is not about payed content.

Furthermore, another form of undesirability is part of this story. The rules are pretty vague on a certain area: what exactly is politics? Are only politician prohibited from placing ads, or does this also go for the NRA? And what will Twitter do if, let’s say, Greta Thunberg wants to place an ad on the effects of climate change? This topic is also heavily politicized. Does that make it politics? In this situation one company gets a lot of power on the concept of politics and decides partly who gets a voice and who not. It is still a question, if this is something we want.

Maybe the power of this measure is mostly in the symbolism. It shows that an unfair way of campaigning, micro-targeting, is no longer possible (on this specific platform). This gives off the following message: social media companies will not let themselves be used in the game of politicians. As symbol this whole thing is of course beautiful, but the desirability and effectiveness are still to be discussed.