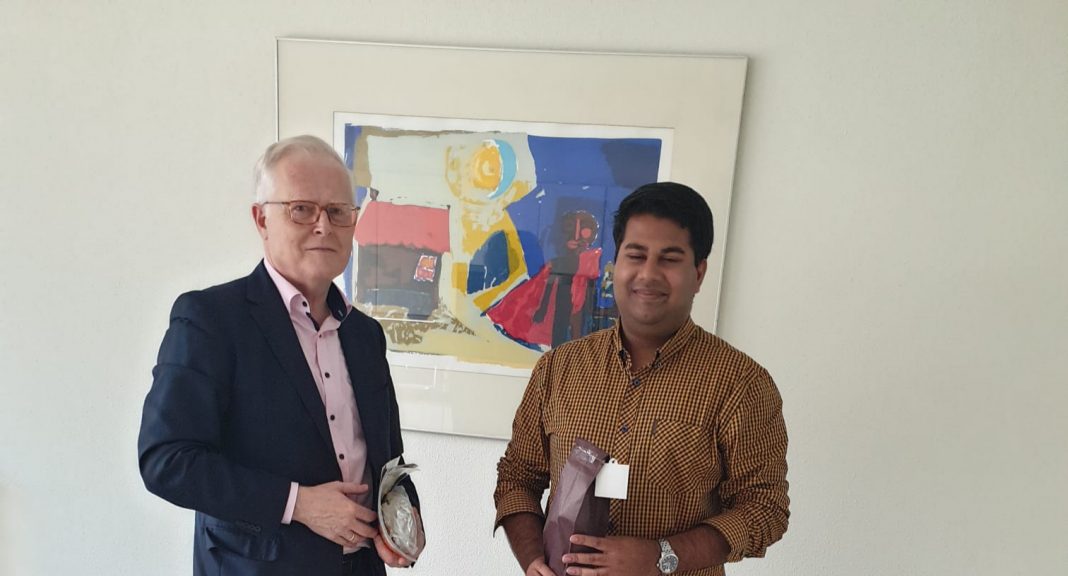 In the Autumn of 2015, Hans Moison repeatedly travelled to Suriname to advise the bank’s management and the Supervisory Board. Eventually, Hans was asked by the Supervisory Board to join them for a year as director of business improvement. At the beginning of 2016, Hans and his wife moved to the tropics and settled in Suriname. Hans kept a diary during his stay in Suriname. Experiences at work, everyday scenes, new sensations and emotions were written down in great detail. His notes formed the basis for the book ‘A bank in Suriname, Pe a moni de?’

Hans Moison, was raised in a Catholic family in Haarlem. He initially studied mathematics and physics, but dropped out because he missed the interaction with society. As an accountant in the financial sector, he would get more opportunities to connect with society. Additionally, he had always been interested in financial developments such as price developments and interest rates. Hans and his wife stayed in an apartment along the Waterfront during their time in Suriname. In his book he describes the surroundings in a romantic, charming way. ‘The Waterfront is a place to hang out and stroll around on Sundays. The road is located on the edge of the old town with the characteristic white wooden buildings. On the other side of the buildings is a small park that is bounded by some sheet piles along the Suriname River. Until a few years ago, the streets of the old centre were constantly flooded during spring tide’ (Moison, 2017, p. 32). The Waterfront would prove to be a beacon of stability during the tumultuous months as the executive director of The Surinamese Bank.

What did you first notice as a board member of The Surinamese Bank?

“At first I was curious about the potential weaknesses in the organisation. In the first few weeks I studied many documents and reports while talking to a lot of other executives and department managers. I realised very quickly that the bank lacked an effective organisational structure. In addition, I noticed that the working environment was extremely hierarchical and employees in all layers of the organisation, were docile. There is little defiance, even though people acknowledge that certain things are not going well. I think they are afraid to raise their voices, they do not want to lose their jobs. Their tasks are carried out without resistance. Perhaps this is typical Surinamese?”

Hans describes that he saw piles of paper and files in many workplaces. It looks chaotic and is not efficient.

In his book, Hans writes about those first weeks: “It is confronting to admit that there is more work to do than initially estimated. The operational work is carried out but there is a lack of management, guidance, and development. There is a lot of talking, but no decisions are made, and concrete developments are stalled. Proposals that we submitted months ago have not been realised. The bank does not assign responsibilities properly nor does it use a list of action points. There are no deadlines at all.” (Moison, 2017, p. 40).

How can the aforementioned obstacles be overcome? Who is responsible for this change in mentality?

“There are people belonging to the new generation who are trying to bring about change, but they do not always get it done because they are being held back by older managers who have been employed there for 30 years. These young people are told, ‘That is how we do it here.’ In Suriname, you often work for the same organisation for a longer period of time. It is not like in The Netherlands where you first work for ABN AMRO Bank for 5 years, and then another 3 years for ING and then for several years at KPMG. Most employees of The Surinamese Bank have never worked at another organization, so there is no learning effect. Because of this, Surinamese organisations remain conservative. You cannot really blame anyone because Paramaribo is relatively far removed from the globalized world.”

“The last few years I have seen a bit more change. You see that people are increasingly demonstrating against unjust policies, the various media are becoming more assertive and people are more willing to express their critical opinions.”

Hans writes in his book on this: ‘The number of protests is increasing. The group ‘We are tired’ demonstrates every Friday at 5:30 P.M. in front of The National Assembly. Recently, the group had to apply for a protest permit, according to today’s newspaper. This was something very novel. The application was submitted to the District Commissioner of Paramaribo Northeast. According to the leader of the protest, the Bouterse government is doing everything to make things difficult for the group’ (Moison, 2017, p. 73).

How did the construction ‘sale & buyback’ work out?

The Central Bank of Suriname simply did not publish the annual accounts after 2014 because it would show losses and monetary financing. The quality of the financial statements published by banks was doubtful. The new government has an enormous amount of work to do in order to achieve financial and monetary stability. The government must invest in the quality of supervision and control mechanisms.”

What important measures have to be taken in order to create monetary stability in Suriname?

“Ultimately, the underlying economic situation determines the value of the currency. That value depends on the degree of imports and exports, and what your balance of payment deficit or surplus is. In Suriname, there is a shortage of foreign currencies and an awful lot of imports. During the 1940s, 1950s and 1960s, there was a lot of revenue from the traditional bauxite industry. At some point, Suriname was the largest bauxite supplier in the world. The bauxite industry eventually collapsed due to mine depletion and reduced quality. Suriname has become too dependent on its natural resources. This created a certain indifference that obstructed economic activity in other areas. A developing country is actually best off without natural resources. This might sound a bit weird, but this way creativity is necessary and innovation is stimulated.”

What about The Surinamese Bank’s market liquidity?

“There simply was not enough money to lend. The bank has solved this by borrowing from the Central Bank for a longer period of time. It is not a good sign when a normal bank has to borrow from the Central Bank in order to be able to provide loans. Market liquidity was low so the bank could not always meet its short-term obligations. If the same thing had happened to a Dutch bank, the entire board would be suspended, and the Dutch bank would appoint a ‘silent’ liquidator. De Telegraaf  would be publishing ‘chocolate letter’ headlines. Treasury meetings sometimes presented around 100 PowerPoint slides, while one slide would suffice in order to reflect the condition of the bank using the liquidity ratio, solvency ratio and profitability ratio. The low solvency ratio was oftentimes only mentioned on slide 76.”

What have you noticed about the Surinamese way of producing annual reports and the accompanying audit carried out by the accountants?

“In my experience, the quality of reporting in Suriname is generally below par. International standards are not yet taken into account’. Hans writes: ‘They (accountants) sign annual accounts that meet the ‘generally accepted accounting principles’, which have no significance in Suriname because there are no prerequisites for the annual report. Companies in Suriname, with a few exceptions, do not report under the International Financial Reporting Standards (IFRS) or the other reporting systems’ (Moison, 2017, p. 117).

What were the consequences of the transaction with customer X?

I believe that the Central Bank, as a supervisor, had also made mistakes.

Once I was back in The Netherlands, Iwan published my story in De Ware Tijd. This way, I cleared my name. Sigmund Proeve would later defend himself in the shareholders meeting. I had agreed with Iwan to publish my article a few days before the shareholders meeting. After publishing my story, Sigmund Proeve decided to resign as CEO in consultation with the Supervisory Board. I felt disappointed at the time because there was little that I could do about the issues at The Surinamese Bank. Hopefully, I have been able to provide a wake-up for the Surinamese people by writing this book.”

For DEBAT Magazine, Dayant Ramkalup has interviewed Hans Moison, ex-board member of The Surinamese Bank. Dayant is a student at Leiden University. He is interested in (international) politics and (Latin) American history and politics. Previously, Dayant has interviewed US Ambassador Pete Hoekstra

Interview with Zohair El Yassini: ‘We are talking about a women’s quota, because that’s just easy.’