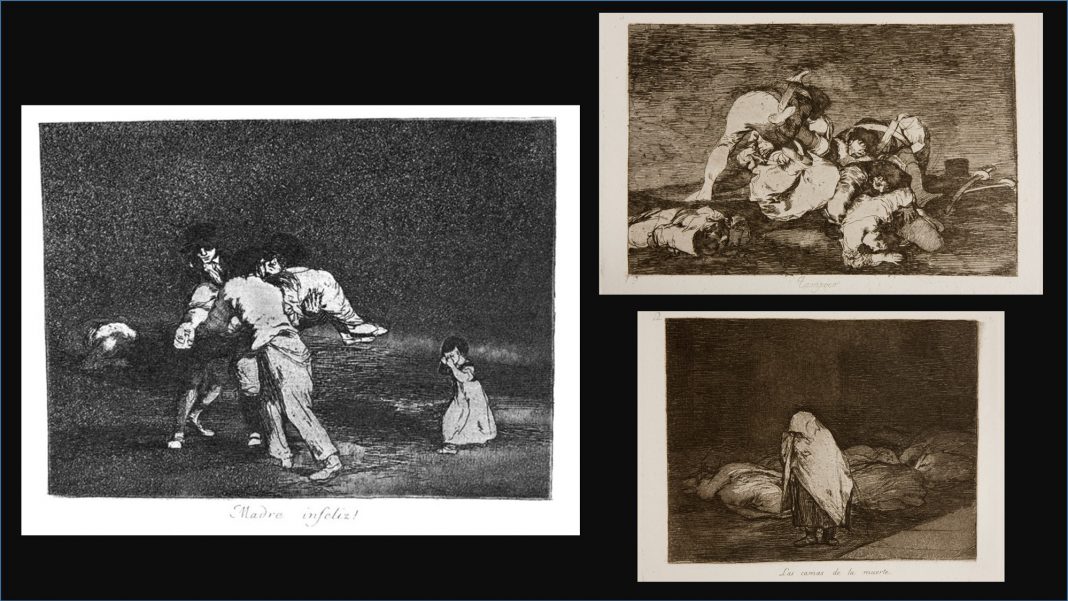 For hundreds of years it was normal for painters to glorify war. Bloody battles functioned as events to be painted by famous artist. You could only be a true aristocrat if you had a big piece of romanticized war on your wall. Francisco Goya (1746-1828) decided to do things differently in his collection called Los Desastres de la Guerra (The Disasters of War). The artist decided to depict the Spanish civil war as it truly was.

Goya focusses on the victim in his 82 etchings. Take Madre infeliz! (Unhappy mother!) for instance. A lifeless body is carried away by two mysterious figures. She is followed by a toddler who can barely look at the horror. It’s an image which immediately induces empathy.

Another horror is shown in Tampoco (Nor do these). Citizens often followed soldiers to the battlefield. When their side won, wife and child went to look for their husband or father. If their side lost, they had to run in fear of being murdered or, like Tampoco shows, raped.

Francisco Goya started of his career as an obedient decorator. He painted cathedrals with figures which did not break with the dominant art norms. When he moved to Madrid he managed to become a portrait painter for important aristocrats, still conforming to the ruling norms. Things started to take off for him when he decided to do things differently and create his own style. He became a court painter.
Then he was hit by illness. He welcomes death and his social life is cut off. After this, his art got darker.

In 1808, Napoleon invaded Spain. A big part of the country wouldn’t have minded some liberal reform. But there was also a lot of resistance. A war started in which a lot of civilians participate as well. In 1812, the French withdrew and Ferdinand VII recaptured the throne. He persecuted his enemies with a heavy hand and introduced the inquisition again. While Goya was making his money as court painter, he was secretly working on The Disasters of War.

His etchings are so innovative because Goya didn’t pick a side. He shows French soldiers who slaughter unarmed farmers, but also Spanish civilians who behead sleeping soldiers with an axe. Before this collection war was often painted commissioned by the victors, which resulted in a romanticized image. There was no place for sorrow. Everything had to be heroic. Because Goya didn’t paint this collection for someone else, he was able to take a neutral pose. This makes The Disasters of War a collection which shows that war doesn’t know victors, only losers.

The Disasters of Peace

The second half of the collection is painted by Goya at the end of and after the war. They are satirical images which criticize church and Ferdinand VII. During these times Madrid is struck by famine. Add the heavy handed rule of the monarch to this and you have a situation which isn’t much better than during the war. Take Las camas de la muerta (The beds of the death) for instance. Here a veiled women is shown walking past a dozen of corpses as result of the famine.

In 1865, 35 years after Goya’s death, The Disasters of War was first betrayed. This is far before modern war making and the discovery of photography. So why does Goya’s work still feel this modern and impactful? A lot of art from those times doesn’t depict reality: a lot of waving flags and imaginary compositions. Goya radically broke with these norms by showing war, with all her horrors, in the most realistic way possible. He zooms in on the individual. That way he gives a face to war. Years after Goya this is still done in modern war photography. Nothing is more impactful than the bare reality of war. Goya already managed to show this. And this makes The Disasters of War one of the most important collections in the history of art.