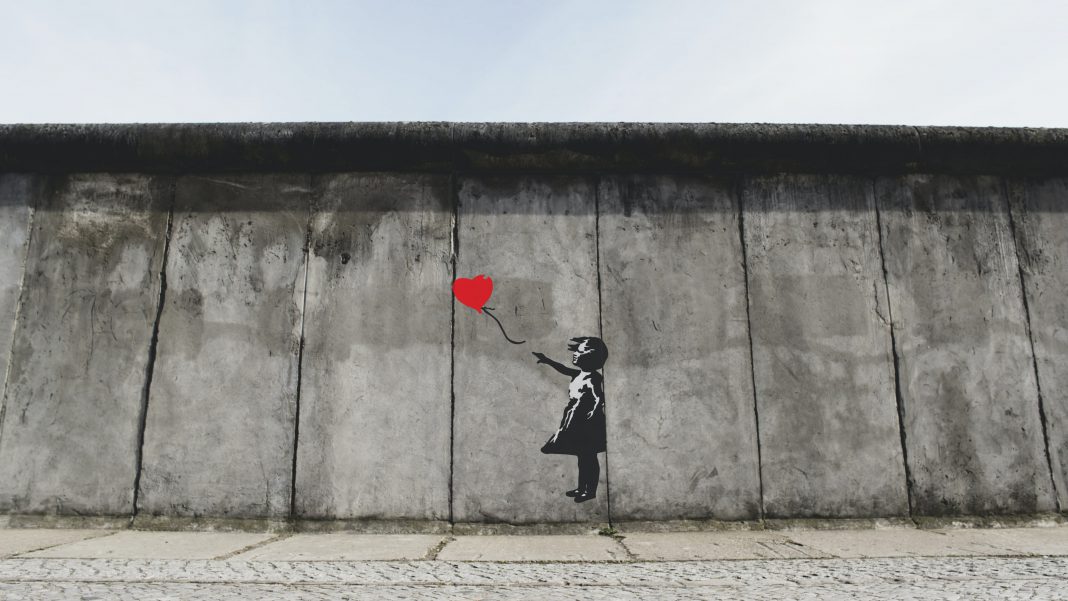 On February 13th, an artwork showed up on a wall in Bristol, England, depicting a little girl firing a slingshot into the sky, creating a red explosion. Given that Valentine’s Day was just around the corner, it’s believed that the little girl represents Cupid. A month later, more art showed up in a hotel in Bethlehem, titled the ‘​Scar of Bethlehem​’. It depicts Jesus’s manger in front of the separation barrier in Israel. The barrier is placed between Jerusalem and Ramallah. This barrier is illegal, as claimed by the International Court of Justice. However, Israel maintains the barrier to prevent terror attacks, while Palestinians believe that it’s an attempt to claim land.

The mysterious street artist, Banksy, is turning the art world upside down. Although his identity remains unconfirmed, he has a great impact on urban art, as in militant art. His work is being viewed as both iconic and controversial. In July of 2019, Banksy was even voted Britain’s favourite artist, beating Leonard da Vinci and Pablo Picasso. Banksy is using his dark humour and political views to make statements on current conflicts, discussions and social events. His work of political commentary can be found throughout the whole world, on streets, walls and bridges.

Banksy is not from an elite or affluent family; he is part of the ‘’underclass’’. Seeing the influence Banksy has, many individuals view him as an example for his ability to take power back from the privileged, since art was something that was only accessible to the elite. This is called the ‘’Banksy effect’’. He has the ability to make art, culturally mainstream. Banksy’s work has led to an increased interest in street art. He uses street art and graffiti to be able to speak to a wider audience, as graffiti is a tool that dates back to Ancient Egypt where it was being used to make drawings on walls. However, nowadays graffiti is related to vandalism. Yet, his influence in the art world continues to grow. Political themes such as capitalism, war, peace and individualism, greed, poverty and hypocrisy are all being tackled by Banksy. ​The Son of a Migrant from Syria, Girl with Balloon, Stop and Search, Bomb Hugger ​and​Rage, Flower Thrower are all artworks which have a great political message and are widely known.

Even though Banksy is looked up to and he continues to inspire people, he has had to deal with a lot of criticism regarding his art. The main question is whether his work should be viewed as art or vandalism?

Peter Gibson, a spokesman for ​Keep Britain Tidy​, sees Banksy’s work as vandalism. Diane Shakespeare, who is an official for the same organisation, was quoted saying: “We are concerned that Banksy’s street art glorifies what is essentially vandalism.’’ In ​The Guardian​, satirist Charlie Brooker wrote in a column of Banksy “…his work looks dazzlinglyclever to idiots.” However, the group that does see Banksy’s work as art is probably larger. That opinion is supported by the high prices that art galleries pay for his canvases and the fact that museums include his work in the collection.

Jonathan Jones of ​The Guardian ​said, ​Girl with Balloon ​being voted Britain’s best loved piece of art last year, was ‘’proof of our stupidity.’’ However, when the British public was asked how Banksy’s art makes them feel, people said: 51% Thoughtful, 24% happy, 22% Rebellious. 66% of respondents said Banksy inspires them.

Another point of criticism is the fact that Banksy makes many statements in his work about capitalism, where capitalism is being depicted as something bad that ruins our society and has a negative influence on people. Instead of caring for the collective, people become more and more independent and the individual is becoming the most important thing in our society, according to Banksy. ​

With capitalism as his main theme, Banksy can be viewed as a hypocrite, for high prices are paid for his work. The high prices of his canvases, according to some, are not accompanied by an anti-capitalist message. Although a lot of money is being invested in Banksy’s work, let’s not forget the fact that he does not receive any money for much of his work; it is drawn and painted anonymously. Moreover, the power of art is priceless; ‘’As soon as I cut my first stencil I could feel the power there. I also like the political edge. All graffiti is low-level dissent, but stencils have an extra history. They’ve been used to start revolutions and to stop wars’’, according to Banksy.

It’s safe to say that Banksy captures the hearts of all generations. The truth that we as a society tend to ignore, is being brought to our attention through the satire in his street art. Conversations and discussions have started because of the way Banksy ridicules the government, and makes us question our leaders.

Even though Banksy has faced criticism for vandalizing public property, it’s clear that his work influences and educates the public. He showed us that law enforcement is more busy with keeping the walls clean than keeping people safe. Children are often represented in his art, which shows them that they are already represented in our society, from a young age. They learn to talk about ongoing issues as well. Freedom of expression through art is a powerful tool and Banksy gives everyone a voice. He does this by showing us that it’s never too late to make great statements on political matters, through art.