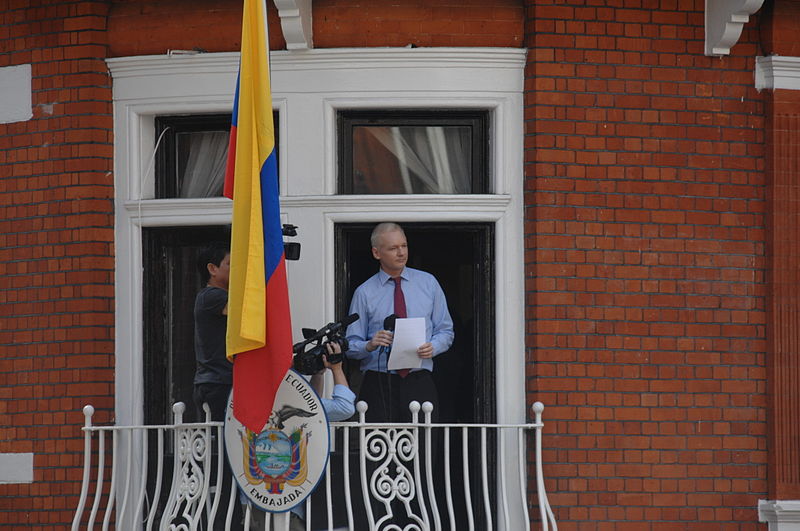 Julian Assange became world famous in 2010 when he leaked a video called ‘Collateral Murder’ on his website WikiLeaks, showing how the U.S. Army killed unarmed Iraqis. The video went viral and the whistleblower got a lot of support and fame;he wanted to ensure public transparency worldwide. However, many people changed their view when he was accused of sexual abuse by two Swedish women. He fled to the Ecuadorian embassy in London in 2012 to avoid extradition to the United States. Assange spent seven years until he was arrested by the London Police on April 19, 2019. Should we think of Assange as a hero of press freedom or as a narcissist who overestimates himself?

Julian Assange, born on July 3, 1971 in Australia, grew up travelling because his parents had a travelling theatre company. He was educated at 37 different schools and studied at six universities in Australia. Assange was often homeschooled and at the age of 16 he received his first computer as a gift from his mother. Assange developed a talent through which he could hack computer systems. In 1999, he attempted to hack a telecommunications company, but he was caught and accused of more than 30 attempts of hacking. In Melbourne he studied mathematics, but quit before graduating. Later, Assange started as a computer programmer and software designer.

In 2006, Assange began to design his website WikiLeaks; a website intended to collect and share confidential information on an international scale. The website was launched in 2007. It was only in 2010 that the website became famous after Assange leaked a video showing how the US army was shooting on unarmed Iraqis. He also published ‘Cable Gate’, which leaked American documents about American diplomacy and 250,000 telegrams were made public.

Many journalists and hackers embraced Assange and WikiLeaks; he and the website ensured transparency and freedom of the press and many journalists wanted to work with him to leak important and secret information. He became famous to the citizens as well because he offered a platform where people could take a look in documents that were not made public before. Transparency and accountability were enforced by Assange.

In 2010, the fame that Assange had, changed in hatred and mistrust: he was accused by two Swedish women of sexual abuse; two counts of sexual molestation, one count of illegal coercion and one count of rape. Assange gave himself in to the London police and was arrested. In 2011, it was decided that Assange could be extradited to Sweden; he fought this, but the High Court rejected his appeal. Later, however (2017), all alleged rapes were withdrawn. Assange argued that extradition to Sweden has a political reason, so that he could be extradited to the United States and prosecuted for the creation of WikiLeaks. He called it character murder and a slander campaign as well.

Life in the Ecuadorian embassy

To avoid extradition, Assange fled to the Ecuadorian embassy in London. He was given shelter by Rafael Correa. Even then Assange remained active and tried to leak secret information on WikiLeaks.

After some time it turned out that Assange felt lonely and he started complaining to the staff and behaving childishly. He would have played football and skateboarded in the corridor. A Ecuadorian minister also said that Assange ”smeared poop on the walls” after he got a cat. The cat has an Instagram account: @embassycat.

On the 19th of April 2019, Julian Assange was arrested by the London police after having spent seven years in the Ecuadorian embassy. Newspapers reported that he looked wild and neglected.

Assange will of course appeal to the freedom of expression and press which is protected in the First Amendment of the US Constitution. However, Assange runs the risk of being extradited and he may have to face the accusation for the fact that he has broken into computers. Moreover, Assange was involved in ‘’one of the greatest hacks of secret information in US history’’ according to a public prosecutor in Virginia. He could get imprisonment for a maximum of five years.

Hero of press freedom or a narcissist?

Although Assange is accused of several things and WikiLeaks no longer has the allure that it had a few years ago, it cannot be denied that he was one of the first whistleblowers and released very important information to the public. He has fought to ensure that companies and public authorities are held accountable. Moreover, WikiLeaks ensured transparency and clarity. Assange has put his life in danger in order to expose corrupt governments. It is ironic that in 2012 the leftist elite thought of Assange as a hero when he leaked secret information about the Bush wars, but in 2016, during the presidential elections in the United States, people viewed him as a spy that was driven by Donald Trump and Vladimir Putin when he leaked Hillary Clinton’s emails.

Of course, Julian Assange has leaked information that was not always tactical, but let us not forget that a lawsuit against Assange harms the freedom of the press as the revealing of government secrets, source protection and encryption are tasks of journalists and these rights should be protected and not punished.