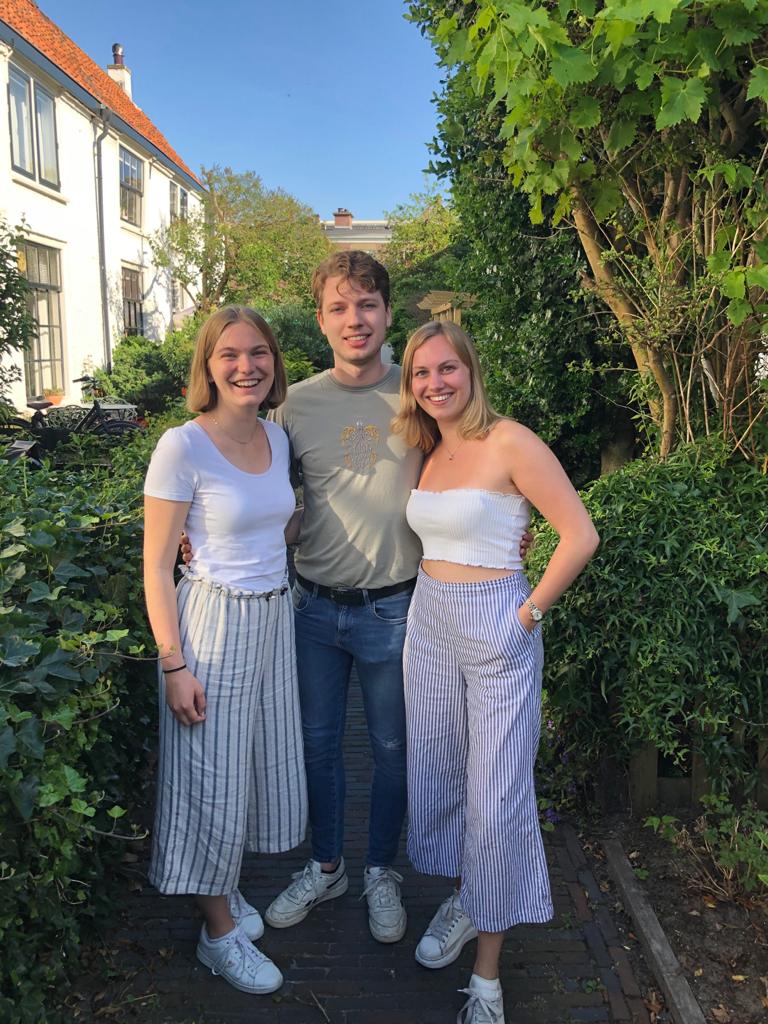 That’s us, Frits, Gaia and Catrin. This German term (Streitlustig) is our perfect description and at first it also seems the only thing the three of us have in common, that we love to argue. About slippers with a cute little rabbit on them (Gaia and Frits) or about basically anything Frits says. He knows exactly what to say to provoke a heated discussion. Counting the hours together in which we three have been fighting in the past year would probably lead to a shockingly high number.

This is not to say that we do not like each other, in fact it is the exact opposite, it is pure love. Our quarrels have only put us three closer together and strengthened our bond. Gaia and Frits‘ love-hate relation had already started before the board year during the SPIL weekend to Maastricht in 2019. Without really knowing each other, the two had found themselves in a fight where they covered each other’s beds in tons of toilet paper which was the beginning of a unique rivalry. In the summer after this they got to know that they would be in the 39th board together. Frits as the Commissioner of Global Relations and Festive Activities and Gaia as the Commissioner of External Relations and Social Activities. All they knew about each other was that the other was the one from the fight during the SPIL weekend. Catrin, who became the Commissioner of Education and Politics, did not know any of the two. The only thing she knew about Frits was that he was very competitive during the beach games at the Committee thank you day.While this does not sound like an ideal basis for the beginning of a board year, it in fact was the perfect combination for a great team of evil to emerge.

Gaia and Catrin very quickly started developing a close bond. The two bonded over sometimes getting lost in the world of the Dutch. Whenever one of the two did not understand a Dutch word or weird tradition a single look would be enough for the two to agree that they had no idea what something was about. Luckily, they have a very patient board around them that always tries to explain every Dutch speciality. But they also bonded over the constant fights that would emerge between one of the two and Frits who really loves teasing and enjoys provoking people (in a positive way;)). I (Catrin) still remember how I saw Gaia and Frits starting a little drunk fight during the Gala. It seemed like they were arguing about a glass of beer but when asked, no clear reason for this quarrel could be given by any of the two, but the fight went on and I had to try to pull the two apart. Really, fighting does not need any reason, as long as you enjoy it. This really seems to be Frits’ life motto and one of the things he enjoys is making politically incorrect comments just to provoke Catrin into getting into a fight. While Frits never agrees with his own comments he just does it for the sake of a debate. And it’s beautiful in every way.

We three can’t imagine anything better than having a good fight with each other. But of course our board year does not only consist of fighting (it would get quite exhausting after a while) but also has many unique experiences of joy and struggles that we experienced all together. Frits and Catrin will probably never forget how they sat at Wijnhaven until closing time putting their committees together and calling people way too late in the evening to congratulate them on a committee spot. Another unique memory will also be biking with Gaia. What started off with a really rainy and wet biking trip at the start of the year turned out to be a true disliking of the Dutch most popular mode of transport. Whenever there is a need to bike, Gaia always complains about it and usually ends up upset, going on about how she really does not like the Netherlands. Catrin really cannot imagine how it is to bike without Gaia and her rant about anything Dutch anymore.

Gaia and Frits also share a few very fun memories that will always make them laugh and will stay with them forever. Sometimes they might be attacking each other with pool noodles, but they also can blast music in the common room so loud that all the hallway associations come by to make sure everything is okay. Whenever it was necessary there was some special drink available, either some special apple juice at the FSW or a special lemonade in Nijmegen. Putting these two brains together lead to some spectacular ideas.

We three are very different people, some of us like crazy nights out, others prefer a good glass of Ginger Ale (has to be read with a very German pronunciation, so that no one understands the word), some find pleasure in career nights and lectures, others in Instagram stories, but the SPIL brings all of these interests together and forms a unique bond between all SPILlers no matter their interest, background or political party preference. The friendship(s) that we have found within the SPIL are unique and we are glad not to have missed out of them.