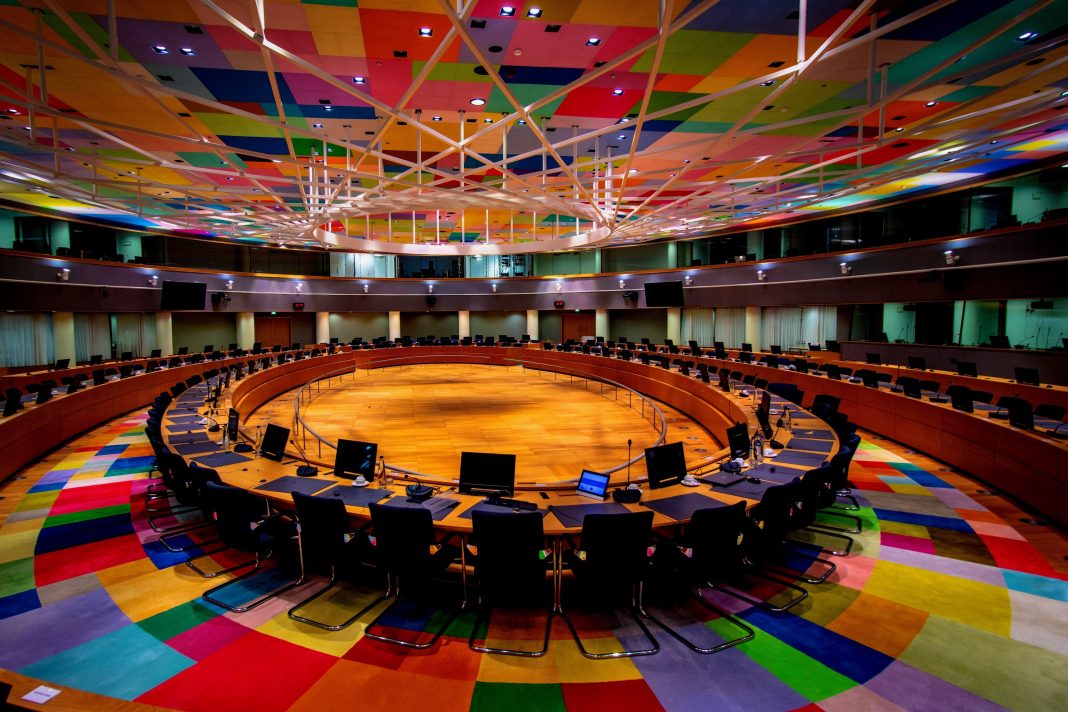 The intentions of the European Union (EU) are clear: have the defensive capabilities to achieve strategic objectives independent of the North Atlantic Treaty Organization (NATO). The ambition to reduce dependence on allies and to make the EU an ever-closer union has led to increased efforts in creating a closer military bond between the member states. The motivation behind such ambitions stems from changed outlooks on international security and cooperation, as well as new ambitions of NATO members; mainly the United States, and the member states of the EU. However, the creation of a closer military union has led to discussions about the interests and priorities of EU member states. For seven decades NATO has been a backbone of European security. The mutual commitments of the NATO and the European block were clear; keeping Europe safe whilst the block recovers from the devastations caused by the Second World War.  The organisation, mainly through the commitment of the United States, assured and provided security for Europe against possible Soviet threats. After the end of the Cold War, the organisation played a more active role and engaged in missions worldwide.

However, the European Union becoming a major economic power, meant it is less reliant on the security guaranteed by the United States. Accompanied by the de-aligned interests of the two organisations, discussions were sparked about the future of cooperation with NATO and about the possibilities of a closer EU-wide cooperation in defense. The position and the rhetoric of the United States recently (calling NATO obsolete or the signing of the AUKUS deal), conflicts close to the border of the EU, and the chaotic withdrawal from Afghanistan, have strengthened ambitions to create a closer military union and strategic autonomy. These events have signaled to the EU to reduce its dependence and increase its participation in the international arena.

How is the European Union trying to create a military union?

Following the formal creation of the European Security and Defense Policy (ESDP) in 1999, the EU has enhanced its cooperation with NATO and several NATO missions in the Balkans transitioned to become EU-led, also known as Common Security and Defense Policy (CSDP) missions. These missions are conducted by EU forces consisting of contributions of personnel and armaments from member states.

The Lisbon Treaty (2009) aimed to set up a centralized, unified leadership and foreign policy. It led to the enhancement of the Common Foreign and Security Policy (CFSP) by emphasizing the CSDP and formalizing the position of a High Representative to act as the foreign representative for the EU. In 2016 former HRVP Federica Mogherini presented two key documents – the Implementation Plan on Security and Defense and the European Defense Action Plan – which aimed to achieve strategic autonomy as well as to create a closer military union.

The initiative of HRVP Federica Mogherini brought many significant changes and enhancements for the EU’s security and defense. Member states started to coordinate in developing and making their security and defense sectors more compatible with each other. Amongst the 13 proposals, the Permanent Structured Cooperation (PESCO), the European Defense Fund (EDF), the Coordinated Annual Review on Defense (CARD), and the Military Planning and Conduct Capability (MPCC) were set up.  All these programmes are coordinated by the European Defense Agency (EDA). Dubbed the EU’s Ministry of Defense, the EDA’s primary goal is to help and promote the integration, and compatibility of the member states’ armed forces.

PESCO is an enhanced cooperation mechanism in which all EU members participate with the exception of Denmark and Malta. PESCO aims to collectively strengthen the defense and military capabilities of the EU. The cooperation consists of concrete projects (46 currently) designed to train personnel, develop technology, and research in various areas such as land, maritime, air, cyber, and joint enablers. Participants of PESCO are committed to increasing their spending on defense, researching, and developing new technologies. Any newly developed technology is shared with the whole community, thus aiming to harmonize the defense forces of the block. For the EU to achieve its ambitions of creating closer military cooperation between member states, harmonization and compatibility are key.

The European Defense Fund was created to coordinate and increase investments and research on defensive technologies, in order to make member states’ armed forces more compatible with each other. The EDF complements national spending on defense, thus signaling the impetus for increasing investments and research. For the first time, EDF is part of the EU Budget for 2021-2027 (8 billion Euros). The EDF’s inclusion in the budget coincides with the strategic intentions of the EU; collectively developing a closer military cooperation. The fund will help member states develop capabilities whilst bridging the technological and incompatibility gaps. EDF expenditure can be split up into two sectors; research and development. Researching and developing new technologies is essential for the EU to materialize its ambitions. Without state-of-the-art technologies, the EU cannot address emerging threats, and therefore decrease its dependence. All approved research projects will be fully financed by the EDF. However, only 20 percent, and only in case of clear intention to buy the developed technology from at least 3 of the associated member states will the EDF contribute financially. The remaining 80 percent is to be financed by the purchaser.

The Annual Review on Defense (CARD) monitors the collective process and projects of PESCO,  oversees the spending of the EDF, and identifies any areas worth pursuing. The intention of the monitoring of the process is to harmonize the developments and purchasing of capabilities among member states. This would enable member states’ defense and security to be compatible. The European Defense Agency (EDA) is in charge of the coordination of the CARD and collects available information about ongoing and finished projects from member states. These are later analyzed to identify trends and promote closer integration. In 2020, the first year of the CARD programme, the report concluded by identifying 56 possible areas worth researching and developing technology in, further increasing coordination between member states.

The Military Planning and Conduct Capability is the new operational headquarter of the EU, responsible for commanding missions. Under the Berlin Plus agreement, the EU can conduct its own missions with the support of NATO’s assets. With the development of MPCC, the EU took a major step towards reducing dependence on NATO, and closer military union. Currently, there are 17 ongoing CSDP missions, 6 of which are military, with the rest being civilian missions. Several of these missions, for example, military training missions (EUTM) in the Central African Republic, Mali, or Somalia are commanded from the MPCC. The new military training mission about to be launched in Mozambique (EUTM Mozambique) will join the list of missions being commanded from the MPCC. With the missions being commanded from here, the EU ensures the missions are not just independent in theory but in practice as well.

Challenges facing the European Union in achieving a military union?

The recent enhancements of military and defense capabilities, complemented by the ambition to have a military union have caused concerns and debates. Diplomats and member states with different histories, threat perceptions, and strategies expressed their opposition to the future intentions of the EU’s military ambitions.

As the majority of the EU member states are also members of NATO, many regard the efforts to create a military union as a duplication of the organisation. Debates about the duplication of roles revolve mainly around the collective defense mechanisms. NATO’s Article 5 states that an attack against one state is an attack on all. However, Article 42 of the Treaty of the European Union is also a mutual defense clause, stating when one member state is attacked, the other member states have the obligation of aiding and assisting the attacked member. Opinions are divided whether with future enhancements, or even a potential military union could set back the position of NATO and as a consequence the EU’s transatlantic relations. Jan Stoltenberg, the Secretary-General of NATO, claimed he supports “the efforts on defense, because more defense spending, new military capabilities and addressing the fragmentation of the European defense industry — all of that will be good for European security, for transatlantic security, for all of us,”. However, he adds he only supports these “efforts — as long as they complement NATO — we welcome them, but the EU cannot defend Europe.” He argues, the First and the Second World Wars are examples of Europe’s reliance on transatlantic relations. Many European leaders, on the other hand, such as Emmanuel Macron and Angela Merkel have argued for the creation of a military union, believing it is time for the European Union to stand on its own two feet and stop relying on others. Their argument is put into context by recent turmoil in transatlantic relations resulting from the messy withdrawal from Afghanistan and even more recently the AUKUS nuclear submarine deal between the United States, Australia, and the United Kingdom at the expense of France.

Another challenge facing the military union is the decision-making mechanism of the European Council. Since most of the CFSP and CSDP missions require unanimity – except sanctions, human rights positions and civilian missions, which only require a Qualified Majority Vote – any new military mission would have to be approved by all the member states. For this reason, the materialization of the military union largely depends on the threat perceptions and the strategic goals of the member states. Consequently, for a mission to be agreed on, and launched, all member states would need to have a common understanding, and strategy.  For example, many countries place immigration as the most important, whilst some regard Russia, or terrorism as the most important. A member state is unlikely to support a mission if it doesn’t align with its national interest. Therefore, CSDP missions rely on voluntary contributions and participation from member states. Such differences essentially mean that not all member states are necessarily part of a mission.

The final challenge facing the EU’s ambitions is the history of the block.  There has already been an effort once to create a military union, called the European Defense Community (EDC). The initiative included having a common army, a common budget, and common centralized institutions. In the end, due to concerns of pooling sovereignty, and the lack of a political will, the project never materialized. The story of the EDC continues to remain in discussions about the potential of a military union, reminding people of the (in)ability to bring an initiative to light without a shared political will.

Although having made significant enhancements in developing, and making the European forces more compatible with one another, the road to achieving a military union is still long, and filled with challenges.  As the Coordinated Annual Review on Defence for 2019-2020 concluded, the European defense and security is too fragmented. The differing capabilities and national interests of member states contribute to a lack of a common vision, making the formation of a military union a highly challenging endeavor. CSDP missions will therefore continue to be conducted on a voluntary basis, and the EU will remain committed to and dependent on NATO.