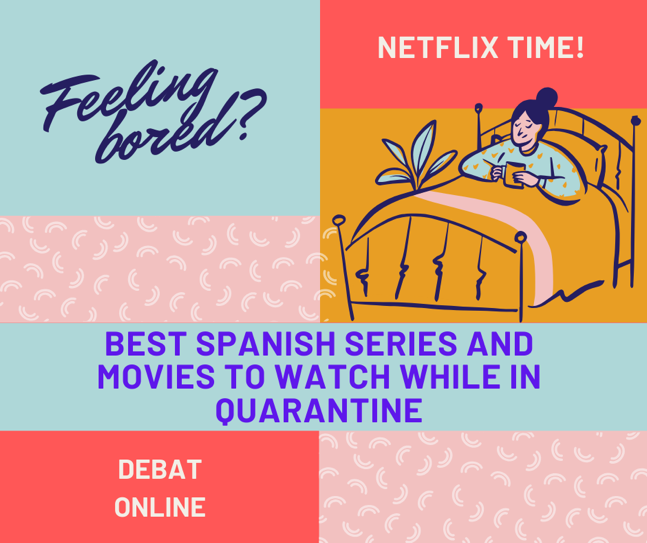 Since everyone is being quarantined at the moment, we as DEBAT Online, decided to write an article where we will discuss the best Spanish series and movies to watch (read: to binge). Why Spanish recommendations? Well, first of all, I think we can all agree that the Spanish language is a fascinating one that sounds good to everyone. Secondly, learning a new language while being in quarantine might be a goal that you have set for yourself. What is a better way to learn a new language than watching Netflix? Lastly, many Spanish series and movies have political messages and since we love politics, we cannot ignore this fact

This series could of course not be missed in our list. The show is a great success all over the world and a new season was released this weekend. The world’s biggest heist is all orchestrated by El Profesor and the goal is to break into Spain’s Royal Mint to print about €2,5 billion. Four months after the first season was released, La Casa de Papel became the most-watched series in a foreign language on Netflix ever. Besides the great actors and the intriguing storyline, political messages are everywhere to be found throughout this series. It’s a show where capitalism at source is being attacked and it’s captivating the audiences. The song ‘Bella Ciao’ that is being sung in the series, was a popular Italian song which was sung by the partisans fighting fascism during the Second World War. The song is a form of resistance; the robbers don’t think themselves as bad people, because they see themselves as revolutionaries who are attacking an unjust system.

However, not everyone is loving the show. The French newspaper Le Monde called the show “an allegory of rebellion”. In Turkey, the show is seen as “propaganda”  and “a dangerous symbol of rebellion” by the establishment.

El Hoyo (The Platform) is a very disturbing and fascinating Spanish movie. There is a lot of blood, cannibalism, fighting and extreme hunger to be seen in it. It’s a bizarre prison where a feast is distributed daily among the prisoners. On the top floor of a vertical prison, an extensive banquet is prepared daily and put on a platform. The concrete platform full of delicacies keeps sliding down one floor, where two cellmates can eat for a few minutes. In practice, however, food becomes trestles, so after fifty floors the plateau is only filled with gnawed bones and empty bowls. The cellmates who are at the bottom of the prison (for example on floor 75, 150, 200 etc.) don’t have anything to eat. This leads to horrendous  events.

The dystopian movie calls for solidarity, even though it’s very hard to find. Goreng, the main character, finds it quite obvious to be solidaire with each other and to keep enough food left for the prisoners who are at the bottom of the prison. He later finds out that it’s not that easy to convince people to keep enough food for other people. The movie is critical of capitalism and the uneven distribution of wealth. All the prisoners are transferred every month to a random, different floor, so that they all know the luxury from above and the battle from below.

#3: Las Chicas Del Cable
In the end, all of us, rich or poor, wanted the same thing: to be free – Alba Romero/Lidia Aguilar

Las Chicas Del Cable is narrated by Alba Romero/Lidia Aguilar. We follow four different women who work as switchboard operators in Madrid in 1929. They form a very close friendship and they end up helping each other going through life. The main focus of this series are the many struggles that women faced back then. Pain, sacrifice, abuse and love are centered themes. They are fighting for freedom in a society that doesn’t allow them to be free.

Many themes that are being discussed in the series are still very relevant today. The women in the series show us that you can only achieve your dreams when you stand together. The show gives us an insight on how women and politics were back then in Spain. Besides, it focuses on the power and courage it takes to navigate in a man’s world. The way they fought for their independence and were given rights can be an inspiration for us all.