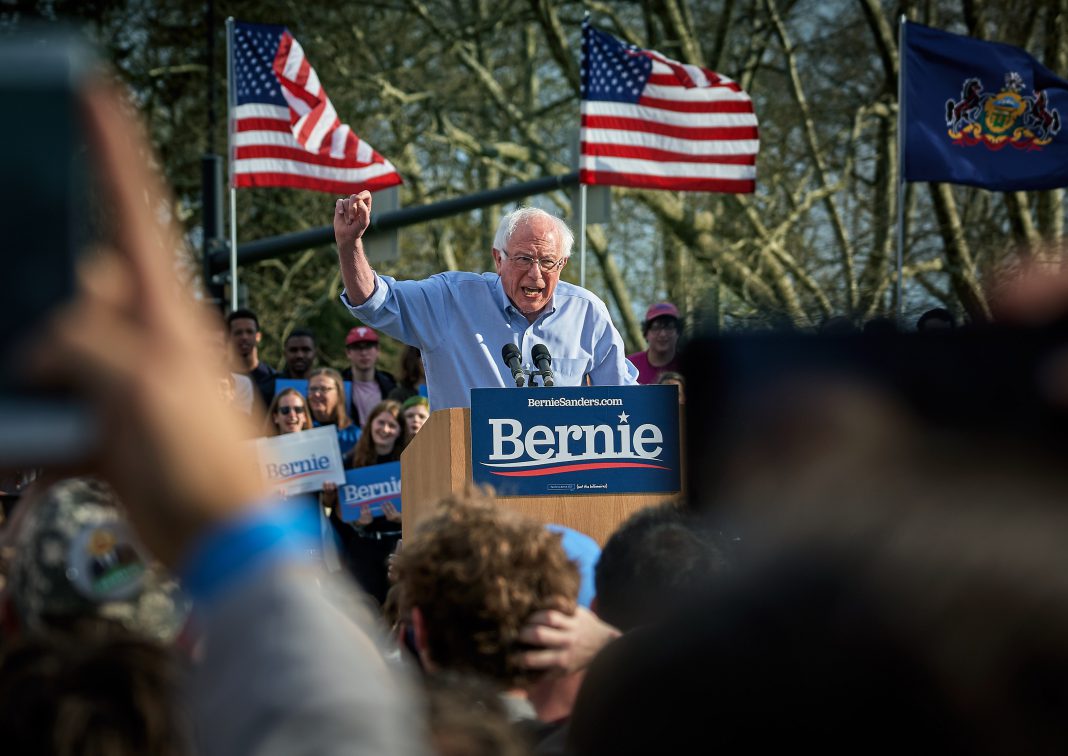 With just over eight months until the US presidential election, it is by no means clear who will be competing against Donald Trump. Two candidates are currently receiving the most attention: Bernie Sanders and Michael Bloomberg. Choosing between an old socialist and a controversial businessman reminds some of the 2016 elections: it mostly seems to be about the least bad one.

In retrospect it is an iconic and meaningful scene: the moment Donald Trump steps onto the escalator in his own Trump Tower in New York, enters the small room with purchased supporters, random visitors received 50 dollars that afternoon to wave MAGA merchandise, and announces that he wants to become President of the United States. It was that moment an unprecedented way of campaigning began, a campaign filled with grandeur, lies and, above all, political geniality. Never before has someone achieved such political success in such an unpolitical way. The events that followed after Trump’s entry into the White House have forever changed American politics, made countless writers and columnists rich, and many politicians in Europe nervous.

Four tumultuous years later, the tension on both sides of American politics is immense, fuelled by an unhealthy amount of polarization. A recent poll that looks at the popularity of the President is a good indication of the division in the American society: 94% of the Republicans surveyed are satisfied with Trump against 7% of the Democratic voters. Trump supporters see, finally, a president who keeps his campaign promises and has put the US in a financial dream situation. For many left-wing voters, however, Trump represents the “wrong” right  and a tyrant moving on the edge of legality. For the hardliners in both groups, a president from the other side of the political spectrum is an absolute nightmare. Politicians who say they will unite these two groups are naive or act for the purpose of political gain. A combination of both is perhaps even more likely.

While Trump, due to his unprecedented popularity among republicans, is certain of his nomination for the upcoming elections, at least 4 Democrats are still fighting for the nomination of their party, although the term ‘’Democrat’’ is controversial for two candidates. Bernie Sanders is leading most polls and while the senator from Vermont usually agrees with the Democrats in Congress, he has never officially associated himself with the party. The way in which the Democratic party dealt with Sanders in 2016 still frustrates his supporters. The party leadership did not dare to opt for rigorous political change and decided to lend their support to Hilary Clinton, a familiar face, the face of the establishment (as seen by Trump supporters). Now that Sanders leads most of the polls, the question arises whether the party will actually support him this time.

Although Sanders does not identify himself as a Democrat, he is definitely not a Republican. That cannot be said so easily of one of his greatest opponents: Michael Bloomberg. He is best known for his company Bloomberg Limited Partnership, which specializes in financial services, and his time as mayor of New York between 2001 and 2013. He started that job as a Republican, became independent in 2008 and returned to the Democrats recently, the party he already supported before 2001.

It may not be entirely clear whether Bloomberg is an idealist or an opportunist, there is no doubt about his financial capital. With an estimated equity of more than 60 billion dollars, Bloomberg is mightily rich and he does not hesitate to use his money for his political campaigns. The advertisements he is broadcasting this campaign already cost him 40 million dollars, but do arguably pay off so far: in recent weeks, he has risen to such an extent that he was allowed to participate in the latest debate among Democratic candidates. A slogan devised by Sanders’ campaign team summarizes the challenge facing the socialist this year in an excellent manner: Bernie Sanders Eat The Rich!

Sanders and Bloomberg are, as mentioned above, not the only candidates who could compete against Trump, but they are the most likely candidates. Pete Buttigieg, Elizabeth Warren and Joe Biden are also still in the race, but especially the last two have faced significant backlash in recent months. Buttigieg did well in the first pre-election and only just lost to Sanders in the second. In the long run, his own qualities might well turn negatively for him: an intelligent appearance (the white shirt with rolled up sleeves is indispensable for progressive politicians nowadays), moderate views and political experience were previously excellent qualifications for a political post. However, we found ourselves in a populist era in which anticipating on uncertainties and hostility yields more political power than common sense.

Warren and Biden, on the contrary, have showed a lack of quality in the last few weeks. Warren’s agenda is simply too similar to Sanders, who also has more charisma. Recent allegations of unfriendly behaviour pointed at Sanders were mostly a sign of her own despair and did not do her campaign any good. The Biden campaign also seems to fizzle out. After all those months, he was one of the first to announce his intentions to run for President, Biden has failed to explain what he exactly stands for. The speeches he gives to his fans are incoherent and uninspired.

The most important mission of the Democrats after the disappointing 2016 elections, finding an experienced and appealing candidate for the next election, seems to have failed. Bernie Sanders can count on a lot of support from young people and minorities, but with his (for America) extremely progressive policy on topics such as migration and government spending, he is not a very attractive alternative for undecided former Trump supporters. Michael Bloomberg is a controversial candidate, and this controversy was immediately addressed in the first debate he participated in: there are allegations of racism and woman-unfriendly behaviour and Bloomberg was unable to dispel the existing doubts about this. His changing political loyalty suggests that he mainly entered the race for self-gain. It remains to be seen whether one of the two, or five, candidates will be able to offer serious competition to a Trump full of confidence. They all show that they particularly do not agree with Trump and his policies, but the last election made it clear that they better take his voters seriously.

Photo in header by Vidar Nordli-Mathisen on Unsplash