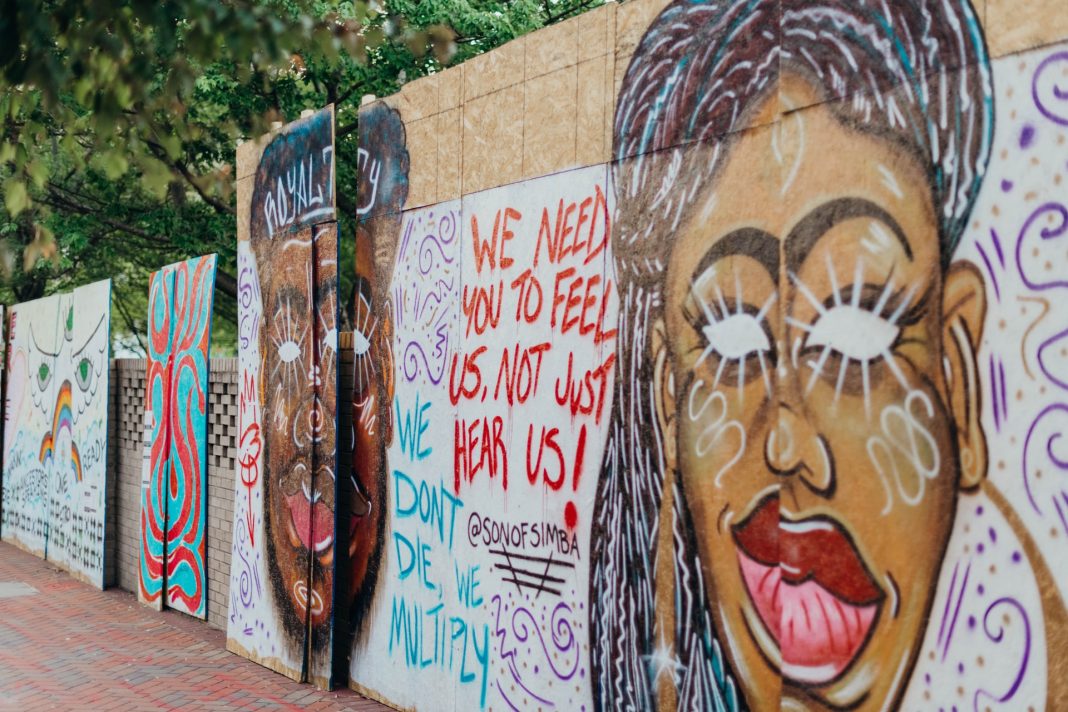 Imagine a crowd protesting. Perhaps it is a march for racial justice? Or maybe a display of resentment towards the government? What unites protests is a sea of colourful signs. It is likely that most people are not even able to envision demonstrations without protest signs. The bond between art and politics is often right in front of us, yet we tend to discard its meaningfulness. After all, these two fields may appear different. But if they are not related then art would not be censored in dictatorships… The correlation begs for a deeper analysis.

Artivism: the what & when

From a traditional perspective, art is a phenomenon not to be intertwined with other strands of society. For many, the prime function of art is to entertain and to serve the viewer with a sense of fascination. Therefore, a glimpse throughout history would suggest that art has always been created with aesthetic purposes in mind. Yet this view is not shared by all. “Every work of art is an uncommitted crime,” states 20th-century philosopher Theodore Adorno. His quote opens an intriguing debate about the nature of art and to what extent it – consciously or unconsciously – influences other areas of civilization. Adorno implies that most artworks are bound to challenge the status quo. Here the fields of arts and politics merge. This assumption that art can be used as a tool to advance political protest has become popular in the modern era. So popular, in fact, that a new term surfaced: artivism. Artivism is a movement that uses the force of creative expression to push activist agendas. Put simply, activists have instrumentalized art. Contemporary examples include the Dada movement during the 1920s which satirized the First World War, as well as the musical response to the Vietnam War and the Civil Rights Movement of the 1960s. Some look further and argue that events like The Boston Tea Party can be considered predecessors of the artivism movement because they contain performative elements.

If art and political protest merged it is because people saw the value in visualizing ideas. To demonstrate the advantage of creative expression, this article shall look at several instances where art was used to promote political aims. Firstly, the fight against AIDS and its stigmatization. During the 80s and 90s, the US federal response to the AIDS epidemic was uncoordinated and inadequate to the severity of the issue. An impactful figure who wanted to break the silence on this was the artist and activist Keith Haring. He firmly believed in the fact that art was not solely for the elite but, instead, for the masses. Through his drawing abilities, Haring established a podium for social issues. His famous work Silence=Death illustrates that art can lend its voice to marginalized groups. This piece shows the stick figures he is known for in a pink triangle, looking distressed and covering their faces. Due to the shame that the disease was branded with, AIDS victims often felt cast away from society. The pink triangle adds to this sense of maltreatment as it was used during to Holocaust to single out people for their sexuality. All in all, the campaign born out of Haring’s artistic efforts changed the narrative on AIDS and in turn, gathered support. How? Because the simplicity of an image spreads messages fast. As a Canadian journal on information practice states: “If information is our currency, [then] transmitting it effectively to users is critical to our success.” This transmission of information is demonstrated by exiles who fought against the Chilean Pinochet regime, once again portraying the high communicative value of art. From 1973 to 1990 Chile was under the ban of military dictator Augusto Pinochet. This caused many citizens to flee out of fear or forcefully. An art form that flourished under this occupation was the arpillera, a patchwork picture that displayed revulsion towards the government. At first, arpilleras were made by shantytown women as a means of expression but soon they started being exported abroad. This process was facilitated by a religious human rights group called The Vicariate of Solidarity. Once the burlaps reached foreign soil, they were sold and distributed by the Chilean exiles who lived there. The distribution of arpilleras had a twofold goal: collecting revenue to support the home front and spreading information. Through the former, the exiles were able to help out the locals who struggled financially while also funding the resistance movement. The latter made the outside world aware of the atrocities committed by the Pinochet regime. The hope was that this information would pressure the international community into action. In short, what unites both of these goals is the exiles’ capacity to aid Chile despite being distanced. Naturally, the spread of the arpilleras alone did not end the military coup. What this form of resistance does exemplify, however, is how artivism transcends borders. And that is something of great importance to activist networks.

“The earth is sic”

A matter that has regularly caused political turmoil is climate change. In recent years, scientists and activists alike have tried to inform governments and their nations about the rising temperature of our planet. What seems to be a reoccurring obstacle is how to communicate scientific findings. In an age where the line between fact and fiction is blurring, climate advocacy networks need a tool to showcase data comprehensibly. Constructivist research from the 1990s shows that for a movement to be effective, its interpretive work needs to reach public understandings. Art can heighten this frame resonance. In November 2020 an Amnesty student group from the Hague launched an art competition meant to find innovative ways of voicing political discontent. Within the theme of ‘Youth & Human Rights,’ Chiara Barbeschi’s submission stood out on social media, titling her the winner of the contest. Her piece includes an illustration and a poem written by a six-year-old. “I wrote this from a child’s perspective, a child’s handwriting – wording, mistakes and [the] innocent tone [were] purposely conveyed. The child feels the world-changing, worries and yet is helpless to do anything. He does not understand the full picture but senses enough to send a positive message to trigger adults and their behaviour. A young person with a big soul,” the 3rd year Security Studies student explains. Chiara’s work represents the advantage of using a relatable narrative over complex accounts.  Reports on climate change communication find that generational responses differ. But what if everyone could take a brief moment to empathize with the six-year-old within us, would it make a difference? Only the future can reveal whether art will contribute to a consensus on global warming, but at least for now, it creates an interesting prospect.

In essence, art can be a useful instrument to advance political goals and the practice of artivism has shown instances of great success. These instances portray diversity in their geographic location, use of mediums and international scale, but they are all connected by their visual power. Although artivism might not always be the definitive factor in creating change, it has earned its rightful place in the larger repertoire of social movements. So next time you attend a protest, spend some extra minutes contemplating the layout of your protest sign, will you?

Photo by Carly Mackler on Unsplash