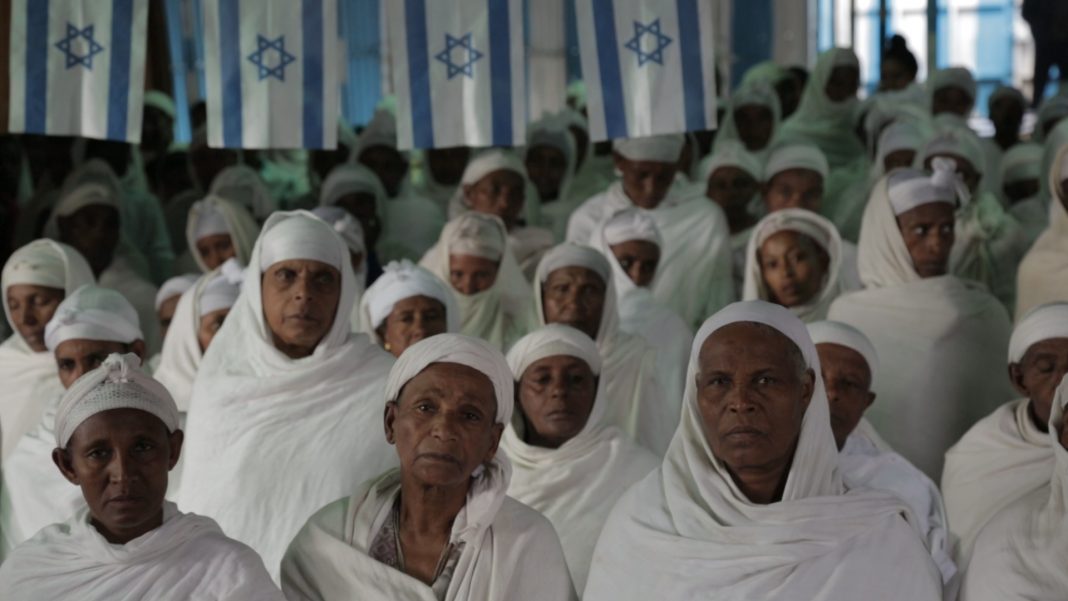 In 1950 the Knesset passed the Law of Return. It grants every Jew the right to live in Israel and attain Israeli citizenship – a fulfilment of the Zionist dream of Israel as a Jewish state. For more than 2,000 years Ethiopia has been home to a Jewish community who call themselves the Beta Israel. For hundreds of years they lived in complete isolation practising a form of pre-Talmudic Judaism dating back to 500 BC, thinking they were the only Jews left. When they were introduced to the customs and morals of present-day Judaism, they accepted them as their own. It however took until 1975 for them to be recognised as Jews, though no less than one year later the Israeli government started to bring Ethiopian Jews to Israel.

After the Six-Day War it became apparent to the Israeli government that demographically the Palestinians threatened the Jewish majority. In the context of a larger discussion on Jewishness, and many Israelis – a lot of them Shoah survivors – calling on the government to expand the answer to the question ‘‘Who is a Jew?’’, to include all who met the definition of Jewishness of the Nazis to have a place in the homeland of the historically persecuted Jewish people. Many Israelis felt deeply connected to their fellow Jews in Eastern Europe who did not meet the requirements to make Aliyah (moving from the diaspora to Israel). In 1970 the Knesset amended the Law of Return and expanded the definition of Jewry. It posed a new challenge, for five years constitutional and halakhic discussion took centre before the Chief Rabbinate of Israel agreed to accept the Beta Israel as Jews.

In 1984 the Israelis, with Operation Moses, started the efforts to bring the Beta Israel home. Operation Moses was the furtive evacuation of almost 8,000 Jewish refugees who had fled Ethiopia and stayed in Sudanese refugee camps. Seven years later, during the final months of the decades-long Ethiopian civil war when the communist regime started faltering, Israel acted once again. The United States, like many countries, were evacuating their nationals from the collapsing People Democratic Republic of Ethiopia (PDRE), and saw a possibility for Israel to act. The Israeli Air Force (IAF) and El Al airlifted 14,325 Ethiopian Jews from Addis Abba to Israel in only 36 hours. Israel had placed the operation under strict military discretion, and – as the lion’s share of the flights took place during Shabbat – all aircrafts and buses used to bring them to hospitals and absorption centres were widely available.

A tribe related to the Beta Israel, The Falash Mura, consisting of those who converted to Christianity, either willingly or by force, in the 19th and 20th century, exists in today’s Ethiopia. A government decision in 2010 pledging to help the Jews left in Ethiopia (including the Falash Mura) make Aliyah led to another operation being started two years later. According to the Jerusalem Post ‘Wings of the Dove’ was meant to bring ‘‘to Israel the very last remnant of the Jews in Ethiopia’’. Seven years later 4,000 Jews and about 8,000 Falash Mura remain in the African country. In November 2018 Israel renewed its pledge, saying it is to bring 1,000 people to Israel in 2019.

”It was difficult to tell who was more joyful – the barefoot Ethiopians who cheered, ululated and bent down to kiss the tarmac as they stepped off the planes, or the Israelis who watched them aglow, marvelling.”

However noble the intentions, the societal implications should not be underestimated. Their socio-economic status, levels of education and unemployment, and linguistic delays are logical obstacles and drawbacks when it comes to absorption into Israeli society – making them a clearly underprivileged group. Although many presumably have better lives in Israel than they would have ever had in Ethiopia, it is nevertheless tragic that a millennia long Jewish tradition in Africa is envisioned to come to an end. At this moment in time, there are about 130,000 Ethiopian Jews in Israel. The changes they have faced, and challenges they still encounter in Israel, both as individuals and as a community, are significant, but not insurmountable. It is evident that they are struggling, but that may be as well the story of the Jewish people.